Hero Drink (英雄の薬, Eiyū no Kusuri?), also known as Hero Cocktail and Hero, is a recurring item in the Final Fantasy series. It is used to boost the stats of a playable character either temporarily in-battle, or permanently outside of battle. In some games, it makes the target invincible.

Hero Cocktail is an item that can only be used through the Chemist's Drink command.

Raises ability once during battle

The Hero Drink is an item used in Materia Fusion. It gives the new Materia an effect of boosting the ATK stat by 1. Hero Drinks can be acquired from the enemies Master Blade and Iron Claw, as well as found from various treasure chests during missions.

Hero is an item that makes a character invincible to all forms of damage. Another item, called Hero Trial (英雄の薬試作型, Eiyū no Kusuri Shisaku-gata?), also exists that also makes a character invincible, and despite its item description, works 100% of the time. A stronger item, Holy War (聖戦の薬, Seisen no Kusuri?), grants invincibility to the entire party, and the item Holy War Trial (聖戦の薬試作型, Seisen no Kusuri Shisaku-gata?), does the same.

Heros are most readily acquired by modifying Laguna's card into 100 with Quezacotl's Card Mod ability. Some can also be mugged from Seifer, and there is a chance to receive some through Angelo Search.

The Hero Drink is an item that makes a character invincible to all enemy attacks. Despite its use, it can only be sold for 25 gil. It can be dropped from Node A, B and C and stolen from Shuyin. Hero Drink can also be used through the Mix ability, as well as the stronger Miracle Drink which affects the entire party.

In the International and HD Remaster versions, the Last Resort Garment Grid gives a character access to infinite Hero Drinks for the remainder of the battle if they pass through all gates. If the player feeds a Hero Drink to a creature, they gain the Critical auto-ability.

In the battle against Major Numerus, Hero Drink lasts much longer than usual.

Hero Drink is an item that activates at the start of the stage, and reduces the damage that the party receives by 30% for the entire stage. It is randomly obtained after completing a Music Stage.

Hero Drink is an item that can be equipped or used manually (Quest Medleys only). It is used at the beginning of the Music Stage and reduces damage taken by the party until the end of the stage and has full strength. When used in Quest Medleys, it reduces damage to party by 30% for next stage. It is obtained randomly after completing a Music Stage.

A vigorous tonic that enhanced the imbiber's physical attack and defense, magic and spirit. Due to its extreme potency, only salve-makers with advanced knowledge can stomach it and gain its benefits. Be forewarned, however, as its formidable effects can lull one into overconfidence and a false sense of invincibility. 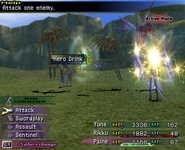