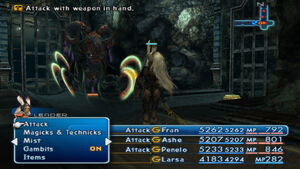 The Henne Mines is a location in the land of Ivalice in Final Fantasy XII. It is an underground magicite mine explored by the Archadian Empire. At first only the Phase 1 site and dig are accessible, however after defeating at least 10 Espers, the Garif Geomancer will open up the gate to Phase 2 where the enemies become much tougher and the Esper Zodiark can be fought, and obtained if defeated. Phase 2 can be accessed from the Feywood, but only a small portion is accessible. The rest of it will be blocked off by a mine cart until the Esper Zodiark is defeated. When accessing Phase 2 it is recommended to wait until the party's average level is above level 70.

The Henne Mines are located just to the southwest of Jahara, and at first are only accessible via Chocobo through the Ozmone Plains. Phase 2 is also accessible through the Feywood, but only a portion of the Phase 2 Shaft. The rest of Phase 2 is blocked off unless the Mindflayer clan hunt is completed, the player has obtained 10 Espers and has spoken to the Garif Geomancer in Jahara. He will open the east gate in the Ore Separation section.

Henne Mines is renowned for two convenient grinding spots. The first is "Pithead Junction B.", which is closer to the Gate Crystal. After touching the gate switch in the room, a limited number of Jellies fall from above, and if they die from the Time Magick Break, they will respawn endlessly. If player programs their Gambits correctly, it is possible to sustain an auto-leveling without touching the controller. Besides the Break spell, it is recommended to have another ally to cast Sleepga on the Jellies and another one prepares curative spells to keep the party alive.

The second spot is "Pithead Junction C." It is quite far from the Gate Crystal and riskier than in "Pithead Junction B". After flipping the gate switch Abysteels will appear. They do not respawn endlessly like the Jellies, but are vulnerable to Sleep, and are damaged by curative magic. With the proper gambit set-up, the player can use Sleepga to neutralize the Abysteels and kill them with Curaja (Renew does not work on them) or Black Magicks without waking them up. Once all the Abysteels are slain, the player must move two areas away and return to spawn more when the switch is flipped again. The Abysteels will leave roughly 3,000 EXP each, which in tandem with their large numbers makes leveling quick and easy. If the party is equipped with "Embroidered Tippets", they could potentially earn up to of 100,000 EXP with each press of the switch.

Retrieved from "https://finalfantasy.fandom.com/wiki/Henne_Mines?oldid=821715"
Community content is available under CC-BY-SA unless otherwise noted.