A former pupil of Mysidia with the ability to strengthen organic bodies by transferring magical power into them. Although Heltich's original intentions were to grant power to the weak, his research lead to the birth of dangerous beasts that subsequently caused his expulsion from Mysidia. Later he would meet a young woman with berserker abilities who helped him gain new insight.

Heltich is a supporting character in Final Fantasy Brave Exvius. He is a Black Mage who was expelled from Mysidia due to his experiments to strengthen others, but who later found himself wanting to help Ulrica, a young woman troubled by her condition as a Berserker.

Hailing from Mysidia, Heltich was an apprentice of black magic who inherited an ancient tome, which detailed how to transfer magical power into organic bodies. Hoping to find ways strengthen and grant power to the weak, and hating human sacrifices, Heltich decided to carry out his experimental spells on animals first. His attempts led to the birth of a beast, and instead of being frightened by the results, this incited him to create even more of them. These beasts were dangerous, however, and his experiments resulted in his subsequent expulsion from Mysidia by its founder, Sakura, and her cohorts.

Even in his exile, he didn't lose sight of his objective. As seen in "Shadow of the Empire", he goes to see the new research that he had heard had started up at laboratory in Surging Volcano. But when he arrives, he finds the facility abandoned and disapproves of the traces of human experimentation that he finds. At that moment Ulrica arrives, currently in her berserk state, and asks him if he is an enemy.

Heltich rapidly realizes she is a berserker and calms her by telling her there are no enemies present, instructing her to take a slow, deep breath. When Ulrica returns to her normal self, Heltich tells her he read about people like her in ancient writings and explains that her condition stems from an imbalance of magical power, and not spiritual power. Seeing her as a study subject, Heltich then asks Ulrica to travel together, both intending to help her find some way to control herself and hopting to perfect the magic he has long labored to complete. Ulrica accepts.

Heltich and Ulrica reappear in "The Phantom Blueprint".

Heltich is an optional playable character. He is a 3-6★ summonable unit and a standard Black Mage, using spells to damage the enemy. He has affinity to five elements (Fire, Lightning, Wind, Earth in the form of spells, and Dark through his Limit Burst) and is able to boost his own MAG and that of the party with his abilities. While he favors rods, he can also equip daggers, staves, whips and maces. As for armor, he can equip light shields, hats, clothes, robes and accessories.

He appeared as a guest unit in the story event The Phantom Blueprint. 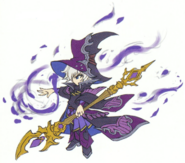