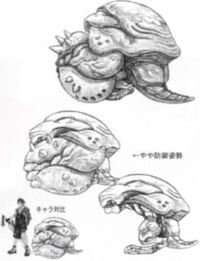 Helm (甲羅, Kōra?, lit. Carapace) is a type of fiend found in Final Fantasy X and Final Fantasy X-2. Helms are classified by their hard, thick shell-like body. Their armored bodies provide good Defense. The easiest way to get past this Defense is by using a weapon with the Piercing ability, magic, or Overdrives.

In all cases, the shell ornaments appear to serve as a camouflage while the helm is laying down, as it will do when receiving a magic attack. In Final Fantasy X each helm's location would help the Helm blend in, with the Helm appearing to be a bump in the road, a mound of flowers, a bundle of ice crystals, or a heap of rocks giving off fog. This does not hold true for Final Fantasy X-2 where the Helms are encountered outside of their niche areas. In Final Fantasy X-2 it takes 14 kills to Oversoul a Helm.