The Hellhound, also known as the CEREBUS in the Nintendo Entertainment System, is an enemy in the original Final Fantasy. It is one of the most common enemies in the Mount Gulg, often appearing with Gigas branch of enemies. It is weak to Ice, as most of the enemies in the volcano are, and absorbs Fire. It may attack for low damage, or use Blaze to hit all allies for low Fire damage. The Hellhound is not hard alone, but as it appears in large groups, one may choose to spread out Ice spells to avoid widespread loss of health.
See also: Hellhound 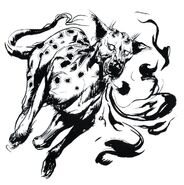