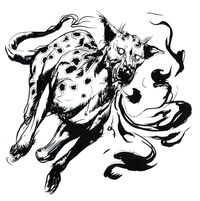 Hellhound (ヘルハウンド, Herūhaundo?), also known as the Cerebus, is a recurring enemy in the Final Fantasy series. It is often portrayed as a wolf aligned with the Fire element, and is usually correspondingly weak against Ice.

The Hellhound (Cerebus in the NES version) is a Fire elemental enemy often appearing with the Gigas type enemy. They are the most common enemy on Mount Gulg.

Hellhound is an enemy fought in the Corneo Colosseum during the "Tomboy Bandit" sidequest in Chapter 14 - "In Search of Hope", where it is accompanied by Beastmaster. Hellhound can also be fought in the Shinra Combat Simulator as part of the "vs. Dynamic Duos" challenge.

Hellhounds are easy to defeat, due to their low Vitality and Spirit, but can dish out quite a bit of damage. They can be found in Mission 1-5-4 and Mission 3-4-5. 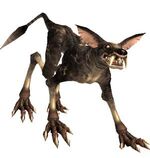 Hounds are wolf-like monsters that come out during the night. There are many different species, one of which is the Hellhound. Usually associated with black magic, they are found in tombs and forests. Because they are classified as undead, they will attack targets with low HP from far distances, but they also take damage from curative magic. 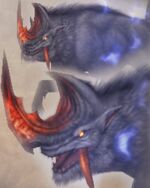 The Hellhound is a beast/wolf-type enemy found in Golmore Jungle. They tend to fight in packs, and are stronger than other enemies in the area, so it is not recommended to fight them during the first visit to the Jungle.

Hellhounds are a rare family of voidsent that first appeared in the Void Ark.

Fell power emanates from this twisted mockery of a wolf.

The Hellhound is a dangerous enemy, and is of the Dark element. When in Critical status, they will call reinforcements, so be sure to finish them off quickly.

Hellhound is an enemy that appears in the Urbeth Area and the Hunting Caves during Part I, and in the Moonsand Ruins and the Trial Tower during Part II.

This section about an enemy in Bravely Second: End Layer is empty or needs to be expanded. You can help the Final Fantasy Wiki by expanding it.

It is the first enemy of the final ten waves in W1, and its speed and HP makes it a troublesome foe even after being fought after a very strong wave.

The Hellhound is a powerful enemy, appearing in the Catacombs, Sanctum, and Abandoned Mines. They are similar to Silver Wolves, but possess a Fire Breath Special attack, which hits the whole of Ashley's body for fair damage.