Don Corneo's secret weapon, a monster in the form of a house. No one knows how it was built.

Hell House is a boss in Final Fantasy VII Remake, fought as a special battle in Corneo's Colosseum in Chapter 9, "The Town That Never Sleeps", during the quest "Underground Colosseum". The boss has various stages to it and changes its elemental affinities.

When it shifts barriers, hit it with the opposing element, such as ice to fire or lightning to wind, to rapidly fill its stagger gauge. When God House Mode is active, attacks will be less effective at filling the gauge, but for a short time after this mode ends, it will be much easier to stagger.

The manifestation of pure evil versus the most badass couple this side of Midgar—have you ever seen a fight more incredible, more epic!?

The battle is fought with Cloud and Aerith. The player can use the bench in the dressing rooms restore the party's HP and MP, and also use the vending machine to restock on items such as phoenix down. Once ready, speaking to the gatekeeper will start the encounter.

The Hell House is a bizarre and notorious boss equipped with various types of abilities, from a barrage of ranged attacks to powerful melee attacks. It switches its elemental properties and protects itself from damage. The vast majority of its abilities deal heavy damage and are physical-based, but when imbued with different elements it'll use more powerful version of its other attacks. Most of its more powerful attacks cannot be blocked.

Kotch will comment on the performance of Cloud and Aerith throughout the battle and will also comment if both are Knocked Out and the player receives a Game Over.

The Hell House starts the battle in its "concealed" state, being less agressive with its attacks. This phase revolves around the Hell House changing its elemental affinities between the four elements with Barrier Shift, becoming resistant to the respective element and empowering some of its moves (although it'll only use the empowered abilities on the last phase) while becoming weak to the opposite element. The color of its windows indicates which element it is imbued with:

The Hell House's main attacks in this phase are

Chair Salvo, which launches a round of flaming chairs that track the characters; and

Fire Crackers, where it shoots exploding toys. It also attacks with the

Hospitality, sucking them through its door and trapping them inside.

Once the Hell House's HP drops to 75%, it sprouts mechanical limbs and a head, becoming more aggressive with more powerful melee attacks. As soon this phase starts, the Hell House charges at the controlled character with

Housing Rush, flailing its arms, which can knock characters down. It stops using Barrier Shift.

When attacked from behind, the Hell House will often use

, where it spins on place while shooting out flames from its thrusters, dealing heavy damage and knocking down the attacker. It now uses Hospitality and House Call more frequently and occasionally jumps outside of the arena onto an unreachable platform near the crowd to perform Chair Salvo from there, jumping back to the arena when it is finished.

Once the Hell House's HP drops to 50%, it starts using God House Mode, creating a barrier that drastically decreases all damage taken, and causes Cloud's physical attacks to bounce back. The shield will eventually break on its own, leaving the Hell House vulnerable to attacks again until it recasts God House Mode.

Rocket Charge, where it charges up for a few seconds and propels itself at full speed towards the player using its thrusters, stopping only if it hits the character or collides against a wall. This attack cannot be blocked and deals massive damage, launching its victim away.

In this phase, the Hell House uses Barrier Shift again, usually after God House Mode ends, and also employs empowered versions of certain attacks depending on which elemental affinity it currently has:

Heavensward, where it flies around the arena, throwing Chair Salvos and Fire Crackers. A countdown from 3 starts and once it ends, the Hell House charges and unleashes

Hellbound, diving at the player and dealing massive damage as it crashes to the ground. This attack cannot be blocked.

After the Hell House lands, it uses all its abilities, including God House Mode and the empowered attacks from Barrier Shift. After a while, it'll take flight again to use Heavensward followed by Hellbound.

The Hell House is even more aggressive in hard mode, and uses some new attacks. It occasionally opens its door and summons three tonberries, which can happen usually once per phase. A Sweeper and a Cutter may be appear from the colosseum gates during the fourth phase if the player takes too long to finish off the Hell House.

As Hell House changes its elemental affinities, a good strategy is recommended to equip all four elemental

Magic Materia between Cloud and Aerith to cover all its weaknesses, and using

Poison Materia allows non-elemental spells to be cast against it.

Summoning Materia can also be used for this battle, but timed correctly to not use the wrong summon at the wrong time (i.e. summoning

Shiva Materia when it has ice affinity);

Shiva Materia is particularly effective since it is a non-elemental summon. The

Healing Materia (linked with the

Magnify Materia) should also be equipped on one character; Aerith is a good choice, as she is more often safe from damage and from the House's Hospitality attack by staying at a distance, though Cloud has more HP. Since this fight is considerably long,

ATB Boost Materia can play a pivotal role when needing a quick ATB for healing or to capitalize during staggers.

The goal for phase 1 is to build a quick stagger to drop the House's HP to 75% as fast as possible, minimizing any damage on the party. It is recommended to build ATB with both characters and always maintain at least one bar full all the time. Aerith should focus on using magic to exploit the House's elemental weaknesses and quickly build up its stagger gauge. The Hell House will almost always start the battle imbued with fire, hence bombarding it with ice magic is the best way to stagger it quickly before it uses Barrier Shift. During the first phase, the Hell House becomes pressured for two seconds if it takes physical damage equal to 1% of its max HP. When this happens, Cloud's Focused Thrust should be used to build stagger fast.

When phase 2 starts, the player can either dodge Housing Rush, or use Cloud to counter it with Punisher Mode. The Hell House will become pressured for four seconds if it takes physical damage equal to 2% of its max HP. When it uses Jetstream, it is best to stand back as far as possible, as it covers a large area around it.

When phase 4 starts, it is recommended to switch to Cloud when the Hell House uses Heavensward followed by Hellbound; since Cloud has more HP and physical defense than Aerith, he should be able to take more punishment. Hellbound can be dodged (and it should, as it can't be blocked), so it is recommended to run around the arena as it fires the chairs and dodge when it descends.

If Cloud's limit break is up, it is best saved for when the boss is staggered, or when God House Mode is not imminent. The player should not not use it near its phase shifts, as it'll simply cancel the Limit and/or it'll do no damage past the breakpoint; the player needs to pay attention to the Hell House's HP before using a Limit Break. Saving it (as well summons) for the final phase is recommended.

The Hell House is susceptible to

Sleep, since—despite its appearance—it is not a mechanical-type enemy, but an artificial life-type enemy. Poison is effective through most of the fight, but particularly useful during the third phase when it starts using God House Mode, since it deals fixed damage and it is not affected by the user's magic stat. Sleep is useful to interrupt certain attacks, such as Housing Rush and Rocket Charge.

Prayer Materia is effective for emergency healing, and ATB Boost can allow it to be used earlier.

Magnify Materia can also be paired with healing materia, and by using Spectral Cogwheel on Aerith with her limit break set as Healing Wind, she can cast it more often.

Time Materia is extremely useful for its

Haste spell, and it is good to cast both haste and

Regen on both Cloud and Aerith as soon the battle starts; setting magnify with either time or healing is ideal.

ATB Assist Materia. As with a normal mode battle, all types of offensive materia should be equipped between Cloud and Aerith. Pairing

MP Absorption Materia with lightning materia on Aerith is ideal to allow a spell that is guaranteed to hit to also restore her MP.

Bahamut Materia is the best summoning materia to equip.

The tonberries should be dealt with as soon they're summoned, with Cloud using Triple Slash and Punisher Mode attacks to quickly dispatch them, since most of the time they drop from the Hell House under the pressured state. Aerith should cast Arcane Ward in the middle of the arena and only cast offensive spells while over it to maximize damage dealt and conserve MP. These spells should be medium-level in the first few phases, or low-level in the later phases, to both be MP-efficient and to hit their target before it moves. Many of the Hell House's attacks can be capitalized on by Cloud using a combination of Punisher Mode's counter and Counterstance; however, care should be taken against the Hell House's unblockable attacks, as they also cannot be countered.

The fight is more challenging than before when Hell House uses God House Form. Crippling its arms and casting spells at any windows of opportunity is recommended at this phase. In the final phase, spells can be used to kill it as quickly as possible before it summons a Cutter or a Sweeper.

The eponymous "Hell House" plays throughout the battle with Hell House and features various phases which play based on the different stages of the battle.

"Hell House" is is track 18 of the fourth disc of the Final Fantasy VII Remake Original Soundtrack.

Hell House was a normal enemy in the original Final Fantasy VII, fought in the Sector 6 collapsed expressway. It was upgraded to a boss because its design was unique and stood out among other enemies, and thus was upgraded to a boss battle. However, the developers felt that its bizarre nature meant it would be strange if it appeared in the world with no run-up, and thus was included in the colosseum as a spectacle.[1] 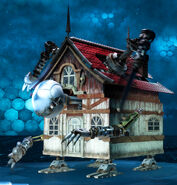 Jetstream.
Add a photo to this gallery

[view · edit · purge]"Hell house" is a term for a man-made haunted house that is used for entertainment purposes.

Retrieved from "https://finalfantasy.fandom.com/wiki/Hell_House_(VII_Remake)?oldid=3325562"
Community content is available under CC-BY-SA unless otherwise noted.