Hell House is an enemy in Final Fantasy VII, and one of the more bizarre-looking ones: inside its house-looking shell, its true form is a three-armed mechanical creature that sports four legs and a set of mismatched thrusters. It is a powerful enemy for its area, Sector 6, and has high HP and attack.

The monster serves as a boss in Final Fantasy VII Remake.

It can be considered a mild threat if not handled properly and is much more powerful than the enemies encountered in this area of the game. It is first fought when the player only has Cloud and Aeris in the party. Aeris can concentrate on healing, and Cloud can use the Cover Materia to shield her.

There are two separate AI scripts for Hell House, the first version is the inanimate form found at the start of battle, and the second version is the animated form once it receives enough damage.

1/3 Chance: Use Erupt on random opponent

Use Suicide Drop on all opponents

Else: Use Bodyblow on random opponent

1/4 Chance: Use Suicide Drop on all opponents

Hell House appears in Pictlogica Final Fantasy as an enemy. 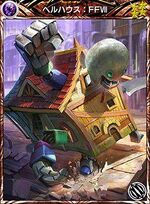 [view · edit · purge]In many mythological, folklore and religious traditions, hell is a place of torment and punishment in an afterlife. "Hell House" is a term for a man-made haunted house that is used for entertainment purposes.

Retrieved from "https://finalfantasy.fandom.com/wiki/Hell_House_(Final_Fantasy_VII_enemy)?oldid=3286114"
Community content is available under CC-BY-SA unless otherwise noted.