An executive officer in the Narshe attack forces. Attacks with Virite and SilverPike. He's weak vs. Fire, so use Terra's Fire magic if she's in the party.

The Hell's Rider (simply abbreviated as Rider in some translations) is a boss in Final Fantasy VI battled during the imperial attack on Narshe. It patrols in front of Kefka. The player can avoid it, but it is difficult. If the player does avoid it, it will still be there running back and forth in the World of Ruin.

Hell's Rider fights alone, a trait he shares with his three palette swap counterparts: Dante, Test Rider, and Death Rider. It uses normal attacks, Venomist that inflicts Poison on the party, and its special attack, Silver Lance, a strong physical blow. It counters attacks with Reverse Polarity, shifting the attacker's row. Locke can steal a valuable Mythril Vest from it, but the Rider will counter with Silver Lance.

The Rider is one of the few non-randomly encountered enemies to appear on the Veldt and have a Rage.

Gau can use the Mu Rage and hope for Snare. His Commander Rage sometimes uses Break, killing the Hell's Rider instantly. Another method is to have Cyan use Tiger to halve its HP and give it Sap.

If attacked by "Attack": Reverse Polarity (33%) 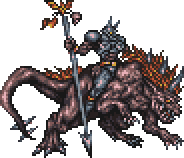 An enemy in Final Fantasy VII is named Hell Rider VR2, seemingly in reference to the previous game's "Hell's Rider". Like the Hell's Rider with Reverse Polarity, Hell Rider VR2 can use Electromag to change the party's rows.

The beast in Final Fantasy VI: The Interactive CG Game.
Add a photo to this gallery

The enemy's Japanese name is "Hell's Harley". [view · edit · purge]"Harley" is a name used to refer to a motorcycle manufactured by Harley-Davidson.

Retrieved from "https://finalfantasy.fandom.com/wiki/Hell%27s_Rider?oldid=3337613"
Community content is available under CC-BY-SA unless otherwise noted.