As he attacks the Warriors of the Light.

Hein, also known as Hyne, is a minor antagonist in Final Fantasy III.

Hein had gained the trust of the king of Castle Argus, which governed a large region of the Floating Continent, and became the castle's wizard. In reality, he is one of several monsters sent by Xande to cause chaos on the Floating Continent, and his true form is that of a skeletal being. He casts a spell over the Elder Tree, causing it to float over the desert south of Castle Argus, and christens it Castle Hein.

Hein bewitches the castle's inhabitants and imprisons them in his new fortress, where he terrorizes the neighboring town of Tokkul. Luneth and his friends are captured during a raid and are brought to the living castle. They overcome the guards and monsters and ascend the decaying tree to face Hein, who shows no remorse for his actions. The Warriors of Light defeat the crazed mage, and the Elder Tree returns to its true form. Before replanting itself in the forest from whence it came, the tree restores the royal family and guards of Argus to their rightful place at the throne.

Hein is fought as a boss.

Hein appears as a prominent character for the Crystal Tower content. Though he wears the same colors as Hein, he has been named Amon by the developers, after his palette swap.

Treachery is all that remains in this hollow skeleton, once King Argus's loyal magician. He brings chaos to the Floating Continent and facing him will only mean death unless you can overcome his Barrier Shift ability.

Hein appears as an enemy during Battle Music Sequences.

Hein appears as an enemy in Battle Music Sequences.

A good wizard gone bad, and originator of the much-loathed Barrier Shift spell.

Hein appears as a sub-boss in the Eureka Forest and uses Thundaga as his ability. Upon defeat he will drop the Artemis Bow, 900 EXP, and 5,130 gil.

Hein changes his weakness through Barrier Shift, his weakness changing between ice, fire and lightning. His defenses are not so high compared to other bosses of his difficulty level.

The player's main concern is Hein's high evasion, being barely able to score a single physical attack on him with the exception of Soul Breaks. It is recommended to have two offensive mages, one white mage and two tanks, and keep trying to hit him with magic/mental break. Hein casts debuffs constantly. Blind is the least of the party's worries, Poison can be ignored as long as healing is constant, but Confuse can prove troublesome. Confusion can be healed by attacking with one of the mages.

Hein appears with a dark-elemental cards with his Yoshitaka Amano artwork and Theatrhythm Final Fantasy appearance.

In Final Fantasy VIII the mythological creator god is called Great Hyne. A character named Douglas Hein also appears as a major antagonist in Final Fantasy: The Spirits Within.

Hein in the manga. 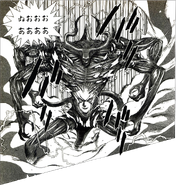 Hein after fusing with Ifrit and Shiva.

Color art of Hein with Shiva and Ifrit.

Hein is most likely named after Magere Hein, the Dutch name for the Grim Reaper. This is fitting, as the Grim Reaper is often depicted as a living skeleton.