Heidegger is a cruel man uncaring of both the lives of the ordinary people who become oppressed by Shinra, as well as the people who work for the Shinra military, treating his underlings as disposable pawns. He enjoys his position of authority within Shinra and the power it grants him, Barret Wallace referring to him as the "chief warmonger". Heidegger's trademark is his "horse laugh", gya haa haa haa!, much to Rufus Shinra's annoyance. When things don't go his way, Heidegger is quick to deteriorate into temper tantrums, slapping or punching anyone within an arm's reach he considers lower ranking than himself after being scolded by President Rufus, or after being given strict orders after Heidegger having failed at something.

Heidegger attempts to command the Turks in an operation in Junon, but his incompetence and over-reliance on the military almost allows Avalanche to take the city's airfield, and the airships. Veld blackmails the President to take back control of his Turks, talking of releasing information on a mysterious "top secret directive". With Veld back in command, the Turks defeat the Avalanche forces.

Although Heidegger does not appear in Crisis Core -Final Fantasy VII-, he is the one who takes command of SOLDIER following another traitor to Shinra, Lazard Deusericus, the former head of the organization's departure. 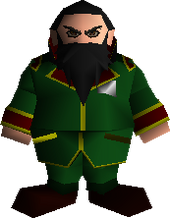 Heidegger, the head of the company's armed forces, observes Avalanche operations in Shinra facilities via security cameras unknown to the terrorists. Shinra allows the acts of terrorism to build Avalanche up as a public enemy, and even detonates the mako reactors the group was going to blow up themselves to inflate civilian casualties. When Cloud and the rest of Avalanche opt to destroy Mako Reactor 5, Heidegger and President Shinra antagonize the group via holograms, gleefully observing their battle against the Airbuster the company deploys upon them live on TV.

While preparing to drop the Sector 7 Plate to crush their adversaries, Heidegger mocks Reeve Tuesti who pleads with his superior against commencing the operation. After Shinra drops the plate, they draw a false narrative implicating Avalanche. Heidegger goes on TV to declare that Shinra will catch the terrorists and bring them to justice.

The Shinra directors gather to a meeting after the fall of Sector 7 plate. Heidegger, as well as the other directors, are uninterested in any rebuilding efforts much to Reeve Tuesti's frustration, and he dismisses Palmer's claim that Sephiroth has returned from the dead and appeared at the Shinra Building. After Cloud and his friends break their friend Aerith and Red XIII out of Professor Hojo's lab, Heidegger tries to catch Barret, Aerith, and Red XIII when they look for a way out of the Shinra Building, but Cloud and Tifa come to their aid in stolen Shinra vehicles and they bust out of the building.

When Rufus first arrives in the wake of the old president's death, Heidegger refers to him as "VP" and Rufus ignores him unless being referred to as "president", much to Heidegger's annoyance.