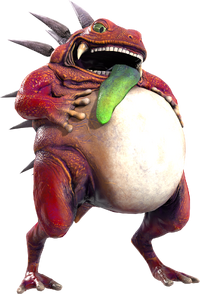 The Hedgehog Pie is a recurring enemy in the Final Fantasy series that first appeared in Final Fantasy VII. Typically a weaker enemy, its design has remained relatively consistent in its appearances—a short and plump, vaguely reptilian-amphibian creature with bright red skin, a series of spikes on their back, and a mischievous grin.

Hedgehog Pies are found early in the game, in the back of the Sector 5 slums church as well as in the Sector 5 Slums. They attack with either a physical Bodyblow or the spell Fire. Due to how weak they are, they pose no real threat. The variation, Boundfat, is similar, but attacks with Ice2. It can be found in and around Corel Valley.

Hedgehog Pies once again have an elemental affinity towards Fire, this time being immune to it.

Hedgehog Pie as it appeared in the Remake appears as an enemy. It has lo defense and is weak to ice. They stay in packs, attempting to steal Gil using Avaricious Bite. They eventually Flee from battle, disappearing.

The Hedgehog Pie is once again a fairly non-threatening enemy, being found on the Eunorus Plains on the Mist Continent. Unlike in its previous appearance, it no longer uses any magic of any kind, instead relying entirely on physical attacks. Later on in the game, the player temporarily gains control of Cid, who must sneak past a Hedgehog Pie without it seeing him move. Quina can eat a Hedgehog Pie to learn Pumpkin Head.

The Hedgehog Pie is one of the earliest encountered enemies in the game, as they are found near the entrances of both the River Belle Path and the Mushroom Forest. They attack both physically and with a Fire spell. 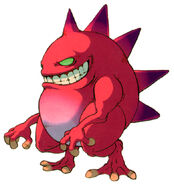