Hecteyes (ヘクトアイズ, Hekutoaizu?), also known as Hect Eyes or 8 eye, is a recurring enemy in the series, introduced in Final Fantasy II. They are commonly blob-like enemies, similar to flan, usually pink, orange or red, with many eyes all over their bodies. Hecteyes are typically a standalone species, although in Final Fantasy XII they're a member of the flan genus.

There are two enemies named Hecteyes. The enemy more commonly known as Hecteyes, titled Gazer in the PlayStation remake, Hect Eyes in the NES fan-translation, and HectEyes in the Dark Shadow Over Palakia translation, is the blue entry to the family. It is fought near Mysidia after obtaining Ultima and in Jade Passage.

Its green cousin of similar ability, Eyemoeba, titled Hecteyes in the PlayStation remake, Eyemeba in the NES fan-translation and Eyeameba in the Dark Shadow Over Palakia translation, is fought in the Cyclone and in Palamecia.

The Dawn of Souls remake introduced Orukat who returns in the 20th Anniversary edition. Orukat is an orange palette-swap fought in the Unknown Palace.

Orukat, known as Oculus in the PlayStation version and Orcat in the RPGe SNES fan-translation, is the only Hecteyes type enemy of Final Fantasy V. An orange/red color, Orukat is fought in the Interdimensional Rift. 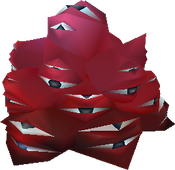 Translated as 8 eye, this monster counters magic attacks with Eyesight, which drains MP from its target. 8 eye is fought in the Temple of the Ancients and in Battle Square, and is weak to Poison. 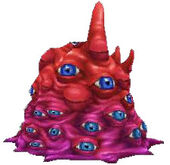 An undead-demon type enemy, Hecteyes is fought in Terra. It can drain HP with Absorb and can inflict sleep with Hypnotize. Its most formidable attack is Roulette, which kills one target at random.

Hecteyes is an enemy race. 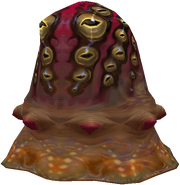 Hecteyes is a flan type enemy fought in the Henne Mines and the Draklor Laboratory. Its bestiary entry claims only one of its pairs of eyes function as eyes, and the rest are to confuse those who try to strike its eyes.

Hecteyes are a rare family of voidsent that first appeared in the Lost City of Amdapor. The most notable hecteyes thus far is the A-rank elite mark Melt, found in the East Shroud.

Hecteyes is fought in Daurell Caverns and the Keycatrich Trench maze, and during the A Nightmare Upon the Water hunt. They are daemons that spawn in the dark and are weak to Holy and polearms.

Unlike its previous incarnations, the Hecteyes appears as a toad-like creature, guarding the staff in the Mine. It does, however, have four very large eyes and three fake eyes each on its front legs and tail.

This gallery is incomplete and requires FFIX version added. You can help the Final Fantasy Wiki by uploading images. 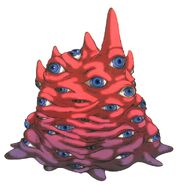 [view · edit · purge]"Hecto" or "Hecta" is a prefix used in the metric system to denote a factor of one hundred. "Hecteyes" refers to the creature's numerous eyes.