Hecatoncheir is Vanille's Eidolon in Final Fantasy XIII. He is an earth-elemental creature with multiple arms. Hecatoncheir's summon ability is Gaian Salvo. 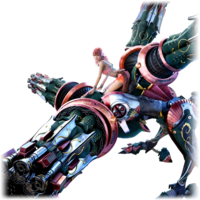 Hecatoncheir is a dark teal humanoid with red accents with numerous arms—two pairs of arms near his chest, eight arms on his upper back, and around eight pairs positioned in a circle at the sides.

The writing on Hecatoncheir and his summon symbol reads (in Latin written in Etro script):

By the grace of Etro, arise great and mighty giant. Come forth, thee who shoulders the sky.
A name in blood, a pact of strength. Hecatoncheir shall rise, his bond eternal and unyielding.
Hands that purge impurity. Arms that harbor strength.

Fang becomes suspicious that Vanille is hiding something from her, and confronts Vanille about their past. To get the truth out of her, Fang lies and says that she remembers the events surrounding their original Focus. She claims she was the one who became Ragnarok and scarred Cocoon many centuries ago in the War of Transgression, not Vanille.

Although Vanille knows the truth, she tries to deny it. As if to punish her for twisting the truth and put an end to her lies, Hecatoncheir is summoned by Vanille's distress. Fang interprets this as a sign of truth and Vanille admits that Fang was the one who transformed into Ragnarok and laid waste to Cocoon. Hecatoncheir then battles Vanille and Fang, as a test to prove Vanille's strength to him. Afterward, Vanille breaks down into tears, saying she did not want Fang to bear the guilt of the beast's bloody rampage, and Fang forgives her.

Vanille rides Hecatoncheir in Gestalt Mode when the party returns to Cocoon and emerge out of a gate above Eden, crashing a grand prix.

When Lightning calls for help the Eidolons, along with her former friends and allies, they answer, and aid her in defeating Bhunivelze. As the souls of humanity travel to the new world born after Nova Chrysalia's destruction, the Eidolons bid farewell to their old companions before fading away.

Vanille and Fang face Hecatoncheir as a boss in Mah'habara Subterra, as a test to prove Vanille's strength to him. Hecatoncheir is the last Eidolon fought.

Hecatoncheir is Earth-elemental and the only Eidolon with the Quake ability. He is the only Eidolon that does not have Curaga, meaning Vanille must heal herself. Vanille's Gestalt Gauge increases by driving up enemy chain gauges, inflicting and removing status ailments and restoring HP. In Gestalt Mode, Hecatoncheir transforms into a Magitek Armor, quadrupedal mech with four machine gun turrets that Vanille can ride.

Hecatoncheir's gameplay concept is Shooting Blaster, and its Gestalt Mode attacks are ranged and place an emphasis on the enemies' positions in the battle. Hecatoncheir ignores physical and magical defense and, despite not having a name for the ability, such as Penetration used by Odin, Shiva, and Brynhildr, possesses an attribute which similarly reduces all resistance and immunity to elements to no resistance.

Hecatoncheir has 6 ATB slots. The Eidolon's rank is the sum of Vanille's current Crystarium level and the number of roles Vanille has advanced to level 5.

While waiting for his ATB gauge to fill up, Hecatoncheir will use Looming Wrath if his target is in range, slowly walking towards them with a chance to counter attacks, including ones a Sentinel normally cannot counter themselves. If Vanille's HP or the Eidolon's SP reaches 0, Hecatoncheir will cast Arise before being dismissed.

Gaian Salvo raises the chain gauge by a various amount based on level prior to dealing damage:[1] 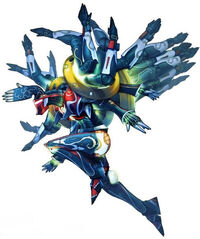 Depending on the summon's type and rank, the user is able to learn the following abilities: 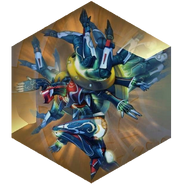 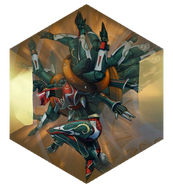 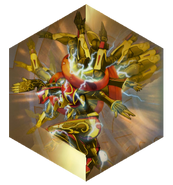 Hecatoncheir is a summon whose Gaian Salvo turns the stage bravery to zero. He takes the appearance from his concept artwork.

He can be purchased from the secret Moogle Shop within the Land of Discord during Scenario 000 for 1,000 KP. 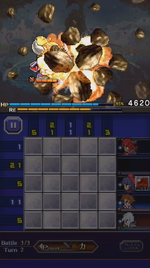 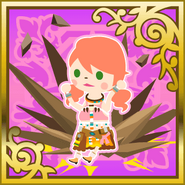 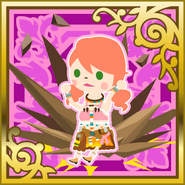 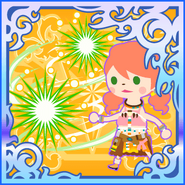 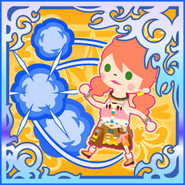 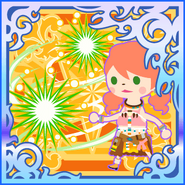 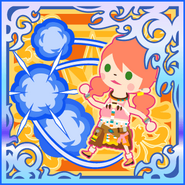 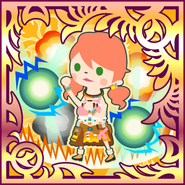 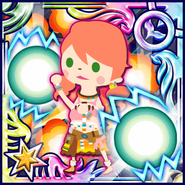 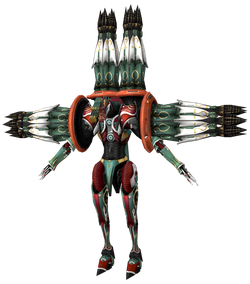 Hecatoncheir appears as an ability card and as an enemy boss during the Final Fantasy XIII collaboration event.

Hecatoncheir appears as an obtainable card.

A question in Brain Blast in Final Fantasy XIII-2 says that Magitek Armor is the "vehicle" that Hecatoncheir transforms into in Gestalt Mode.

Vanille almost always calls him Hecaton. However, she does rarely say Hecatoncheir, pronouncing it "Hec-a-ton-care". Due to the serious nature of the battle, Vanille uses alternative lines related to Hecaton during the final boss battle (for example, Vanille summons him by calling out his full name, in addition to using an alternative set of attack lines during the final battle). 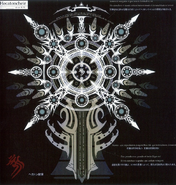 Concept art of Vanille and Hecatoncheir.

[view · edit · purge]The Hecatoncheires were children of Gaia and Uranus who were thrown into Tartarus as soon as they were born. They were released by Zeus, and aided him in overthrowing Cronos. They were giants depicted with one hundred arms (and sometimes even fifty heads). The name (Εκατόγχειρες - Hecatonchires) is of Greek origin: Hecaton (εκατόν-) means one hundred and chires (-χείρες) means hands.