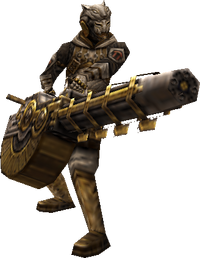 The enhanced armor these troopers wear does not indicate any sort of special status. Rather, these gunners are issued the same gear as supersoldiers out of necessity: the high-caliber heavy machine guns they wield are inoperable in the hands of a common soldier. The guns themselves are known as Type-37 17mm Rotary Cannons, multi-barrel machines nearly ten times more powerful than standard issue rifles. Once they run out of ammunition, though, operators are left completely vulnerable while they reload their weapon.