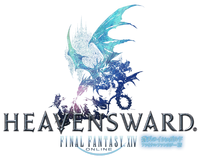 "Heavensward" is a song from Final Fantasy XIV: Heavensward, composed by Masayoshi Soken, arranged by Yoshitaka Suzuki, and prepared by Sachiko Miyano. The lyrics were written by Michael-Christopher Koji Fox and the female vocalist is Omega Bone.

It plays in the opening movie and is featured in many of the trailers. It is a 4:19 minutes long medley featured tracks from the game including "Solid", "Ominous Prognisticks", and "Torn from the Heavens".

"Heavensward" plays in the opening movie of Heavensward.

It is the 1st track in Heavensward: Final Fantasy XIV Original Soundtrack.

An instrumental arrangement by Ken Ito titled "Imagination" plays in the

The Aetherochemical Research Facility final dungeon. "Inception" is another arrangement which was arranged by Soken.

The Final Steps of Faith. They were arranged by Suzuki.

The Great Gubal Library (Hard). It also plays during the bosses of the floors 101–200 in Palace of the Dead.

The motif of "Heavensward" is incorporated in "Endwalker - Footfalls".

"Heavensward" plays during the fifth phase of

The last stanza is written in Dragonspeak, with an adapted Eorzean translation to the right.

Bound fast unto our fate
One path, one burden great
Yet ever do our aching souls point Heavensward
Ever rings out our song

Yes, ever do our aching souls march Heavensward
As they've done for so long

No forgiveness
No deliverance
Only Justice
Only Vengeance

Guide us, O mighty Fury
Guide us to victory!

Dys An Sohm In (Our slumber disturbed,)
Rohs An Kyn Ala na (All my brothers wake.)
Mah Morn Na-ah-ah-ahrr (The saviors must perish.)
Sahl Djahs Afah An (Vengeance will be ours.)
Eorzea!

A concert performance of "Heavensward" for the Eorzean Symphony was recorded and appears on this album. It was conducted by Hirofumi Kurita and performed by the Tokyo Philharmonic Orchestra and the Mih Khetto Chorus, with Keiko Tatsumi as the soprano soloist.

"FINAL FANTASY XIV : Heavensward" is an concert performance performed and recorded for the Final Fantasy 30th Anniversary. It was conducted by Arnie Roth and performed by the New Japan Philharmonic and the Tokyo Art Academy Singers.

"FINAL FANTASY XIV: HEAVENSWARD" is a concert recording which appears on this album. It was conducted by Arnie Roth and performed by the Distant Worlds Philharmonic Orchestra and Chorus, with Laura Strickling as the soprano soloist.

A concert performance of "Heavensward" for the Eorzean Symphony was again recorded and appears on this album. It was conducted by Hirofumi Kurita and performed by the Tokyo Philharmonic Orchestra and the Nikikai Chorus Group.