Heartless Angel (心ない天使? or こころないてんし, Kokoronai Tenshi?), also known as Fallen One, is a recurring enemy ability in the Final Fantasy series that brings the party's HP down to 1. While it debuted in Final Fantasy VI, it has become one of Sephiroth's signature attacks in Final Fantasy VII and beyond.

Heartless Angel (called Fallen One in SNES version) reduces all opponents' HP to 1 and costs 20 MP for the enemy to use. The attack depicts angels coming down from above (the same animation as Raise), dealing damage.

Heartless Angel is cast in the battles against Bizarro∙Sephiroth and Safer∙Sephiroth. It takes the form of a single angel that sprinkles magic on the player characters, leaving them with one HP.

Sephiroth uses Heartless Angel during his first battle with Zack Fair. Professor Hojo's simulations of Sephiroth, Experiments No.'s 107, 108, and 124, also use the attack. Some normal enemies have an attack called Heartless Needle, which functions similarly to Heartless Angel, but is a melee attack rather than a spell.

Sephiroth uses Heartless Angel at the last stages of his final boss fight after performing Elemental Infusion: he flies down and releases several feathers that generate a field of red energy that can inflict severe damage, but not outright reduce the party's health to zero. It can be dodged by avoiding the red field.

When using this attack, Sephiroth says one of the following:

Heartless Angel is used by Bhunivelze's fourth form. Two angels, one white and one black, circle around the player. After some time passes, they reduce Lightning's HP to 1, unless the player performs a Perfect Guard to nullify the damage. The two angels resemble the fal'Cie Eden. When the attack is performed, Bhunivelze smiles, perhaps indicating he was starting to gain emotions as a result of accidentally absorbing Hope Estheim's soul.

Kefka uses Heartless Angel as the opening ability in his god form in the savage version of Sigmascape V4.0. It drops the entire party's HP to one and is followed up by Ultima, requiring quick healing.

A stronger version, Heartless Archangel, is cast from then on, and will similarly drop the party's HP to one but will also leave a debuff, making all healing ineffective. The debuff lasts longer the less HP the player has compared to their max HP at the time of the cast, so the party should be at full health to receive the shortest duration of three seconds.

Sephiroth can use Heartless Angel during his EX Mode. The attack will reduce the opponent's Bravery to 1, but only functions if Sephiroth is not afflicted with Break status.

Heartless Angel is one of the bonuses of Sephiroth's EX Mode, with the same functionality as it had in the first game.

Heartless Angel is Kefka Palazzo's EX Skill, marking the first time Kefka uses it since Final Fantasy VI. It inflicts all enemies within his vicinity with a number of status effects, which differ on whether the attack was charged. If charged fully, it inflicts Sleep, Silence, Blind, Imp, Poison, and Confuse.

Heartless Angel also is one of Sephiroth's HP attacks. Rather than a spell, it is a single powerful slash wreathed in dark energy that inflicts Doom on the target, causing instant Break after 15 seconds, so long as Sephiroth isn't hit by the target he inflicted the status effect on.

When faced as an enemy, Sephiroth and his manikins can use this skill. Unlike in other Dissidia adaptations, it will always reduce the target's BRV to 1, even when they are already inflicted with a BRV break (thus it essentially makes the victim recover from break status).

Damage all enemies for 3/4 HP

Heartless Angel is an special ability exclusive to Kefka. It costs 20 MP and enables him to inflict HP damage by 75% to all enemies. Kefka learns the skill upon reaching level 76 (5★).

Heartless Angel is used prominently in Sephiroth's boss battles. The move drains Sora of MP, and will leave him with 1 HP. Heartless Angel can be cancelled out if Sephiroth is struck amid the casting motion, as it takes a few moments to cast. In the first game, due to the manner in which Sephiroth's voice actor, Lance Bass, delivered his lines, the move was misidentified as "Sin Harvest", which was even noted in the Kingdom Hearts official strategy guide. 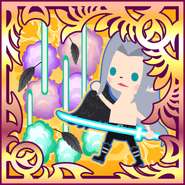 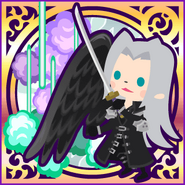 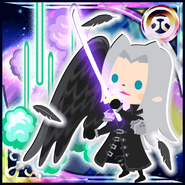 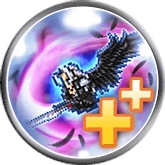 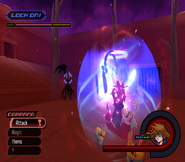 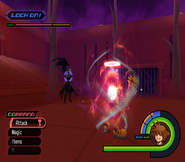 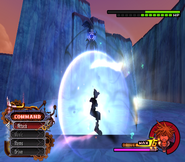 [view · edit · purge]An angel is a non-physical entity or spirit found in various religions and mythologies. In Abrahamic religions and Zoroastrianism, angels are often depicted as benevolent celestial beings who act as intermediaries between God or Heaven and Earth, or as guardian spirits or a guiding influence. Other roles of angels include protecting and guiding human beings, and carrying out God's tasks. The term "angel" has also been expanded to various notions of spirits found in many other religious traditions. In art, angels are often depicted with bird-like wings on their back, a halo, robes and various forms of glowing light. [view · edit · purge]An archangel is an angel of high rank. Beings similar to archangels are found in a number of religious traditions, but the word "archangel" is usually associated with Abrahamic religions. The word is derived from the Greek ἀρχάγγελος (arch- + angel, literally chief angel). In addition, "heartless" is a term meaning a lack of feeling or compassion. Angels are typically described as benevolent.

The original translation in Final Fantasy VI, "Fallen One", refers to the fallen angels. [view · edit · purge]A fallen angel is a wicked or rebellious angel that has been cast out of heaven. The term "fallen angel" does not appear in the Bible under that exact term (with the closest instance of it appearing under that term being Nephilim, which translates to "Fallen" in Hebrew), but it is used of angels who sinned (such as those referred to in 2 Peter 2:4, "For if God did not spare angels when they sinned, but cast them into hell and committed them to chains of gloomy darkness to be kept until the judgment ..."), of angels cast down to the earth in the War in Heaven, of Satan, demons, or of certain Watchers. The term has become popular in fictional literature regarding angels.