Drink this water to restore your energy.

Healing pot (回復のツボ, Kaifuku no Tsubo?, lit. Pot of Recovery) is a recurring feature of the Final Fantasy series. Along with Inns and Save points, it is a small object that allows the party to be fully restored. It appears in very few games compare to Healing Springs, and it often appears in the shape of a urn. Often, a blue-tinted screen accompanies the healing when using the healing pot.

A healing pot is found within the Labyrinth of Time, inside the Netherworld Crypt area. It fully recovers HP, MP and status ailments.

There is a healing pot next to the hole in the wall inside the Elder Tree.

The first healing pot appears inside Damcyan Castle on 3F, the pot on the right recovers MP only while the pot on the left recovers HP and status effect. There is another one found inside the Dwarven Castle's Dwarven Base that recovers both HP and MP. Though it is not a pot, there are two recovery points found in the Crystal Palace's 1F, the HP one on the left side of the room and the MP one on the right side.

There is a single healing pot in Cave of Eblan's B2 during Edge's tale.

A healing pot can be found during Rydia's Tale of the game, located on B2 of the Agart Mine. Two other healing pots are located in Lodestone Cavern during Palom's Tale.

There are three healing pots in Final Fantasy V and both fully heals HP and MP, removes status ailments, and revive dead allies.

Inside the Beginner's Hall, there's a healing pot that contains water from a healing spring. There's no pop up message after pressing the Confirm button.

A healing pot can be found within the Spelvia Dungeons. As there is no MP in the game, healing pots only restore HP.

In Harmonia, after the party enters the airship and lands, the player can find a soldier with a healing pot right next to him in case the party runs low on HP and/or MP.

This section about a location in Final Fantasy Dimensions is empty or needs to be expanded. You can help the Final Fantasy Wiki by expanding it.

Healing pot can be found across the countless dungeons, they are usually found nearby saving statues. Healing pots restores both HP and MP. 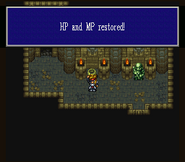 This gallery is incomplete and requires Final Fantasy Dimensions added. You can help the Final Fantasy Wiki by uploading images.
Recurring elements and topics
Community content is available under CC-BY-SA unless otherwise noted.
Advertisement