Casts Regen on one character.

Healing Spring (回復の泉, Kaifuku no Izumi?, lit. Spring of Recovery) is a recurring item in the series. It generally bestows the Regen status to a single target.

Healing Spring is an item that bestows Regen status to one target for 10 turns. When 60 are used for an aeon, they can learn the spell Regen. When 12 are used for Customize on an armor, it will gain SOS Regen, while using 80 will allow the armor to gain Auto-Regen. Healing Spring can be stolen from Achelous, Behemoth King, Catoblepas, Evrae Altana, and Vorban, dropped from Kottos, or bribed Octopus, Phlegyas, and Achelous.

Healing Spring is an item that bestows Regen to the party, and when three are used on a monster, they will learn the Regen spell. It can be stolen from Elma and Valefor.

Healing Spring is used as an enemy ability by Ebony Goon.

SINGLE: Bestows the effects of Regen. 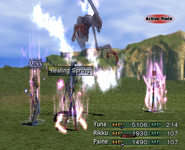 [view · edit · purge]A holy well or sacred spring is a spring or other small body of water revered either in a Pagan or Christian context, often both. Holy wells were frequently pagan sacred sites that later became Christianized. The term holy well is commonly employed to refer to any water source of limited size (i.e. not a lake or river, but including pools and natural springs and seeps), which has some significance in the folklore of the area where it is located, whether in the form of a particular name, an associated legend, the attribution of healing qualities to the water through the numinous presence of its guardian spirit or Christian saint, or a ceremony or ritual centred on the well site.