A rod said to bestow the vast healing powers of white magic.

Healing Rod (ヒールロッド, Hīru Roddo? or 癒しのロッド, Iyashi no Roddo?), also known as Heal Rod, is a recurring rod in the Final Fantasy series. Much like the Healing Staff, it generally heals the target when attacking with it, or can cast the Heal spell when used as an item during battle.

Healing Rod provides 9 Attack, +3 Intelligence and Spirit, and casts Heal when used as an item during battle. It can be found at the Sylph's Home, and can be equipped by Rydia, Palom, Leonora, Harley, and Golbez.

Rod that restores HP to whomever it taps.

Healing Rod restores HP to a target when attacked physically and heals undead targets, but ignores the target's Defense. It has an attack power of 200, the highest attack power for rods. This weapon is ignored by the Optimize option in the equipment menu. It can be found in the Esper Caves and Tzen, and can be equipped by Strago, Gogo, and Relm. It is affected by the Capture glitch and the Healing Rod targeting bug.

Healing Rod is a weapon for Dagger that can be bought for 1,770 gil after the party returns from the Outer Continent from the following shops: Alexandria, Treno, Lindblum, the Oeilvert Mogshop, and the Desert Palace Mogshop. Prior to this, it is also found at the Iifa Tree. It has an Attack power of 23, and teaches the abilities Healer, Cura, and Life, and when attacking with it, will heal that target (unless the target is undead).

In the original PlayStation 2 version, Healing Rod has an Attack power of 13, as well as +2 Magick Power and +12 MP. Upon attacking with it, there is a chance of inflicting the Regen status on the target, plus it ignores the target's Evasion (however, the wielder can still miss due to bad accuracy, such as when blind). It requires the Rods 2 License for 25 LP. It can be bought for 3,000 gil in Jahara, Nalbina Fortress, Mt Bur-Omisace, and Rabanastre. Rods are among the slower weapons with 2.72s charge and 1.2s action time.

In the Zodiac versions, it now provides 7 Attack, 6 Evade, +2 Magick Power, 33 combo rate, has a 100% chance of granting Regen on a target, and requires the Rods 2 license for 30 LP. It can be bought in Rabanastre, Nam-Yensa Sandsea, Tomb of Raithwall, Jahara, Balfonheim Port for 2,590 gil, found as a treasure in Ogir-Yensa Sandsea (East Junction), or poached from Wild Onion (3% chance). It can be equipped by the White Mage who has the Rods 2 license equipped for 30 LP.

The Heal Rod appears as a 2-handed rod within the Forsaken Dungeon. It provides 13 Weapon Atk, 9 Durability, +10% MAX HP, +2 Magic Atk, +4 Magic Def, and -1 Speed. Only Clair Andrews can equip this weapon. 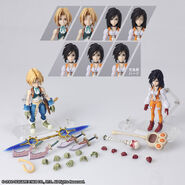 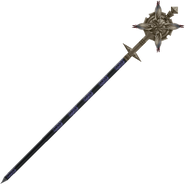 This gallery is incomplete and requires Final Fantasy VI (2014) added. You can help the Final Fantasy Wiki by uploading images.
Blunt weapons
Community content is available under CC-BY-SA unless otherwise noted.
Advertisement