The spell can be bought at Elfheim and can be learned by the White Mage and White Wizard classes. In the GBA/PSP/iOS releases, it costs 10 MP to cast. It can also be used from the Healing Staff and Healing Helm for free.

Heal is the command used whenever a Potion or a Hi-Potion is used in battle. It restores a small amount of HP to one unit.

Heal is the spell used through using the Healing Staff as an item. It restores minor HP to all party members, and has a spell power of 12. The spell is classified as a White Magic spell in the 3D versions.

Heal is an Item Magic spell via the Healing Staff. It restores minor HP to all party members.

Heal can be used via the Healing Staff and Healing Rod. Brina's Dance command randomly casts a White Magic spell called Heal Dance, which casts Heal on the entire party. It is also be used by the Duke Malboro.

Heal is a command in that instructs a character to quit whatever they were doing and attempt to regenerate HP and MP. Generally, the player will appear to be kneeling as they are healing.

HP/MP healed is equivalent to 10 HP and 12 MP per tick, plus 1 HP and MP per additional tick spent healing. Clear Mind increases the MP per tick regenerated and there are many pieces of armor, weapons, as well as food that can increase both HP and MP regained. While healing, a player will lose 10% TP per tick.

The status ailment called Virus will prohibit a character from healing until the sickness is removed by an item or spell.

Heal is a Shaman Spell learned from the Grimoire Guerir. It costs 5 MP to cast and restores the target's HP.

Heal is a single tech of Frog that cost 2 MP to cast. It restore a moderate amount of HP to all allies.

Heal is a level 1 Holy Magic for the Bishop. It allows the target to recover 30% of their maximum HP. This spell can be group-cast, and will deal damage to undead foes. Group-casting will decrease potency. HP recovered will be capped at at 9,999 when not using Bravely Second. It costs 5 MP to use. It can be bought in Gathelatio, Eternia, and Chompshire for 200 pg. 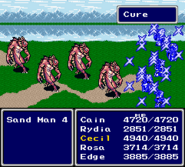 Heal used as an enemy ability in Final Fantasy IV: The After Years (Wii).

Heal used as an enemy ability in Final Fantasy IV: The After Years (PSP). 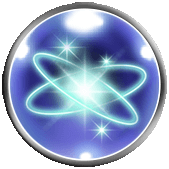 Icon in Final Fantasy Record Keeper.
Add a photo to this gallery