The Havoc Skytank is a boss in Final Fantasy XIII fought at the end of Chapter 7 outside Hope Estheim's home. It is a flying war machine operated by Sanctum forces on their mission to capture the rogue l'Cie taking shelter at the Estheim Residence. As a flying opponent it is out of reach of weapon strikes, and thus Lightning will use the gun mode of her weapon and spells to hit it.

- Cannot be attacked at close range.
- Delivers devastating physical attacks.
- Immune to all status ailments.
- Can be attacked in multiple locations.

Lightning, Fang, and Hope participate in this battle. The Skytank opens the fight with its Main Cannon attack, which inflicts a large amount of damage to all party members, and uses its Hulls and Turrets to inflict severe physical damage to the party. Whenever a Hull or Turret is destroyed, the Skytank will lose 20% of its HP. Once its HP falls below 73,500, it will be vulnerable to stagger, with a stagger point of 200%. It will only use its Main Cannon attack, though it will be weaker than before.

Havoc Skytank is a long range target, thus Lightning will only use her gunblade in the gun-mode when selecting the Attack command (this is the only battle where she will shoot a target rather than strike it). If the player queues Blitz, Lightning will cast a Ruin (with an increased cost) instead. If the player will queue another Ruin (Blitz or regular) she will cast them separately, meaning she will start at the beginning of her combo instead of continuing it. If the player queues any of the elemental -strike abilities, Lightning will instead cast a spell of the same element (Thunder for Sparkstrike and Water for Aquastrike). Like with Blitz, she will not combo them.

Fang, who wields a melee weapon, cannot use the Attack command and is forced to resort to Ruin spells. If Odin is summoned, he will use spells rather than melee attacks. In Gestalt Mode, only Thunderfall will be effective.

Since Fang can only use Ruin, it will help to boost her magic stat. Lowering her strength by equipping the Gae Bolg can also improve the target time. Her Saboteur role is useless due to the Skytank's immunities.

Even with a Doctor's Code equipped, this fight will demand more potions than previous boss fights, though they're still cheap and heal a respectable amount.

Lightning's Auto-Battle will select Ruin, but her ranged Attack commands are shot out extremely quickly. This makes her even more effective than Fang, who is hindered by a low magic stat.

A good strategy is to start with Lightning as a Medic, Hope as a Synergist and Fang as a Sentinel (or Commando). The party should be prepared to shift to two Medics and a Sentinel if too much damage is sustained. Once all characters are under Protect, the party can shift to a more offensive paradigm and begin assault on the Hulls and Turrets one at a time.

As none of the targets can be staggered yet, it helps to use a Commando, Ravager, and Medic combination. The paradigms COM/COM/RAV and COM/SEN/RAV can also work well. Defeating the support targets not only lowers the Skytank's damage potential, but also takes a large chunk out of the main target's large HP. Once all support targets are defeated, the party can focus on the Skytank itself.

The use of Main Cannon can be avoided by holding off on destroying one of the Turrets or Hulls until the Skytank's HP is between 73,500 and 88,200 HP, at which point destroying the remaining Hull or Turret will defeat it.

When the Havoc Skytank becomes vulnerable to stagger at low HP, the party can shift to a Commando and two Ravagers and aim to stagger it, and heal with a Medic when necessary.

If a player attempts this fight having used no Crystogen Points at all, the player should have a Tungsten Bangle equipped on both Lightning and Hope, given their low HP, and a Black Belt/Tungsten Bangle on Fang, so she has a higher resistance to attacks. The player should keep quite a few Potions in stock. The use of a Fortisol and an Aegisol makes the battle easier, but the battle can be done without them.

The recommended paradigms for this battle are:

The player should start off with Protection and let Hope bestow Protect on everyone if an Aegisol wasn't used. Thereafter, the player should switch to Solidarity and blast the turrets with Attack or Ruin, whichever of Lightning's STR/MAG stats are higher. Entourage would also be a good match with Solidarity, boosting the chain gauge while still obtaining defensive properties. Once either of the units are staggered, the party should switch back to Solidarity.

Once the weakened Havoc Skytank is all that is left, Relentless Assault or Diversity are good paradigms, but if one wants to play it safe the Solidarity/Entourage rotation can be kept. The chain gauge should be boosted all the way to a stagger, which can be done once the Skytank has approximately 75,000 HP left. Once staggered, the player should change to Tireless Charge. If a party member is brought down to about 50% or critical health, the party should shift to Solidarity to heal up or use a few Potions.

The Skytank is an aerial target, so melee attacks will miss. The player will need distance weapons and magic in order to take it on. Targeting the four support arms is the quickest way to defeat this boss, as each support arm will damage the body once downed. The Target Score associated with this enemy requires for all participating characters to not die during the battle against it. 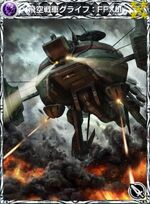 Missile Barrage.
Add a photo to this gallery

Retrieved from "https://finalfantasy.fandom.com/wiki/Havoc_Skytank?oldid=3352884"
Community content is available under CC-BY-SA unless otherwise noted.