Cid Pollendina: Oh, shut up and help me remodel the Hauyn page!
Please expand this article into a full one. The following tasks need to be completed:This request can be discussed on the associated discussion page. Remove this notice upon completion.

Eden Riegel
Hauyn, also known as Wyn and as Woman in the Cage, is a character from World of Final Fantasy. She is a summoner who's like an older sister to Lann and Reynn. She is devoted to Lusse, the woman who adopted her into their family. Hauyn's personal Mirage is Siren.

Notes: "Wyn" for short / The woman in the cage, who the twins thought was their mom

Bad Blood
Hauyn appears to have some kind of deep-seated grudge against Lann and Reynn. But if they are truly family, then what could have happened?

Family
Hauyn is not a lineal descendant of the Farna bloodline, nor is she Lann and Reynn's sister by blood. However, she was taken in and raised by their mother, Lusse, and became family to them all the same.

Hauyn bears an atavistic resemblance to her siblings because she, too, is descended from the first Farna, and comes from a distant but hereditarily strong branch of the family. Her age, seventeen, does not factor in the years she spent trapped in the cage, outside of time.

Architects and Breakers
You may recall Hauyn speaking to Lann and Reynn about their unique powers. Lann seems to have largely inherited their father's "Architect" powers, while Reynn has inherited their mother's "Breaker" powers. However, that is not to say their powers were evenly split; if so, Lann would be a godlike Architect and Reynn an unparalleled Breaker. Instead, the two seem to share a mixture of abilities which they wield inconsistently when apart from each other, and neither as skillfully as their parents.

A Tragic Figure
Hauyn used to be full of kindness...but that was before Lann locked her in a cage for a hundred years. One can hardly blame her for hating the twins for all the harm they have done. However, the type of cage Hauyn was trapped in is like a prismarium; while it stops time, it also preserves the soul inside it. That means time could not erode Hauyn's feelings beyond the point of reconciliation.

It is worth nothing that for certain reasons, a woman named Hauyn can be found in many A-Worlds. However, sadness always awaits this woman, no matter where she resides. Destiny just isn't on poor Hauyn's side.

Hauyn's Future
After Lann and Reynn left Grymoire in her care, Hauyn took that responsibility seriously, and has stuck her nose into many affairs to preserve the peace (with the help of Tama). However, she sometimes sticks her nose in too far, causing more troubles than solving them. As Hauyn always possessed potential as a summoner, she is able to use the Mirages she inherited with relative ease, save the more powerful Mirages such as the Pleiad. For those, she depends on Tama (Tamamohimé) to issue orders in battle.

Grymoire's Future
Due to the long tyranny of the Bahamutian Federation, and the loss of the stabilizing presence of the Farna line and other Jiants, Grymoire's very existence has slowly begun to unravel. The borders between worlds have grown weaker, leading worlds to coalesce with one another and bring about unnatural phenomena. This had lead to the creation of new Mirages and Champions, but has also attracted dangerous elements such as the Immortal Dark Dragon. With other worlds also being affected, this may signal the beginning of a pivotal and tumultuous era for the A-Worlds.

Prior to the game's events, Hauyn was adopted into the family of Lusse and Rorrik. She was trained in the art of summoning and was raised alongside Lann and Reynn. As the twins grew up and became more powerful, she got entangled into one of their schemes to lessen their mother's burden. Having second thoughts about opening a gateway to another world, Hauyn tries to stop the twins from going through with the plan. Tired of her interference, Lann encases Hauyn in a crystalline cage. In doing so, Lann and Reynn use Hauyn's summoner ability to open the Ultima Gate, with Hauyn calling out to them from her cage to no avail. Following the twins summoning Brandelis to their world and the metamorphoses of their parents into the Exnine Knights, the Pellinore and the Segwarides, an encaged Hauyn watches the twins escape from their home.

Several hundred years after the twins reopen the Ultima Gate, Hauyn expresses her disbelief at the recreation of the events that led to her imprisonment.

At Balamb Garden, the twins confront Hauyn to ask about their role in collecting Mirages. Hauyn concludes that they don't remember anything about their past, mentioning that they wouldn't have approached her had they remembered it. The twins continue to ask their questions to Hauyn about her imprisonment, their parents and her involvement with the Exnine Knights, with the latter becoming angrier with each revelation. Outraged by the twins, Hauyn summons her Mirage, Siren, and flies away from the twins, telling them that they should go home and that she'll be the one to save their parents.

In the Exnine Castle, Hauyn fights a losing battle against the Pellinore and Segwarides. The twins arrive to her aid as Hauyn begs them not to fight. After the duo defeat the Exnine Knights, they watch the knights revert back into their parents. Hauyn rushes to the dying Lusse's side, letting her know that the twins lost their memories after being spliced out of Grymoire. Lusse tells Hauyn to forgive her children, which causes Hauyn to cry. Moments before Hauyn can say anything, Brandelis kills her and the twins' parents.

In the Postscript, Hauyn is beckoned by Reynn via Serafie contacting Hauyn's Mirage to meet at Balamb Garden. Having been briefed by Reynn about the outcome of their final showdown and the nature of the twins' powers, Hauyn realizes that Lann borrowed her powers when he'd imprisoned her in a cage. She agrees to provide her services as a summoner to the twins in order to reverse the Ultima Gate's flow, having forgiven them for their past actions and insisting that they call her Wyn once more.

Hauyn is a playable character when the player finishes every Intervention quest then clears the Postscript in the Maxima version. She appears on the field alongside Lann and Reynn and can switch between Jiant and Lilikin form, but does not participate in battles.

The following is a list of quotes by Hauyn: those uttered in the Nonary Region during the postscript, in the Twins' Room after clearing the Postscript and every intervention quest, and in The Sunken Temple in the Maxima version.

Reynn: Your familiar is Siren, right, Hauyn?
Hauyn: Yes. She was my very first summon, thanks to the dagger.
Reynn: Then...who was the Mirage with that illusion in the mask?
Hauyn: That was Carbuncle. You see, he was the second Mirage that I bonded with...
But they took Carbuncle away from me. His soul is theirs now.
Reynn: How? The Exnine Knights can do that?
Hauyn: With enough magic, anything can be turned into a portal... 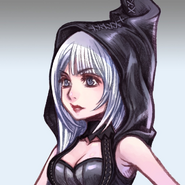 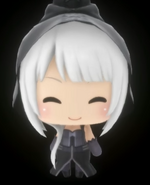 Tamamohimé, Hauyn, and "the wanderer".
World of Final Fantasy characters
Community content is available under CC-BY-SA unless otherwise noted.
Advertisement