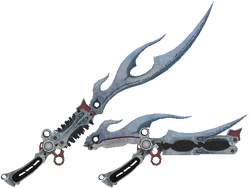 Hauteclaire (オートクレール, Ōtokurēru?) is a recurring light sword in the series, which originally appeared in Final Fantasy XI.

Hauteclaire is a sword that provides 46 damage, 240 delay, Accuracy +7, Divine Magic Skill +8, Physical Damage Taken -7%, and an additional Light damage effect. It deals 11.5 damage per second and accumulates 64 TP per hit. It can be equipped by level 71 Paladin, Dark Knight, and Rune Fencer. It is dropped by Khimaira. It was also available during the special Mog Bonanza (2008 -2010 (Rank 3)) and Nomad Mog Bonanza 2010 (Rank 3) events.

Hauteclaire is a weapon for Lightning. It is a member of the Gestalt group, requires 54,800 EXP to upgrade to its full level, and can be bought from Gilgamesh, inc. for 20,000 gil or found in the Mah'habara Subterra. It is a rank 4 weapon, with a minimum Strength and Magic of 13, and maximum Strength and Magic of 138. It provides the Stagger Lock passive ability. When Hauteclaire reaches level 26 using an Uraninite on it, will upgrade to the Durandal model, level 19.

The choice of the name "Hauteclaire" for one of Lightning's gunblade models may be a reference to her real name.

Paladins. It can be purchased in Ishgard with Centurio Seals acquired from the Hunt. An Antiquated Hauteclaire was once required to upgrade to the Hauteclaire, but is no longer available.

Hauteclaire is an SSR sword based on its Final Fantasy XIII appearance. 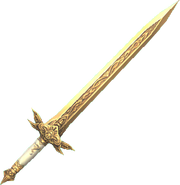 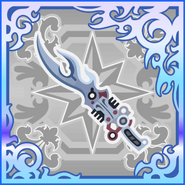 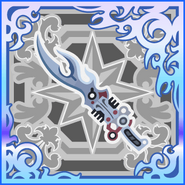 [view · edit · purge]Hauteclere (or Halteclere, or Hauteclaire, literally "High and neat") is the sword of Olivier, a character in the French epic The Song of Roland. As spelled, it combines "high" and "clear".