A knight lives to serve─to aid those in need.

Haurchefant Greystone is a non-playable character in Final Fantasy XIV. He is a noble of House Fortemps of Ishgard, and presides over Camp Dragonhead in the Coerthas Central Highlands.

Haurchefant is the illegitimate son of Count Edmont de Fortemps. Though Haurchefant grew up in his father's household, the two were not close, and as an illegitimate child, his relationship with his stepmother was strained. Haurchefant met Francel de Haillenarte at the age of twelve outside of a party at Fortemps Manor, which the countess had banned him from attending. Five years later, Haurchefant rescued Francel from a trio of kidnappers while wielding only a knife and using his bare forearm to block an arrow. Performing this act of bravery earned the young Elezen his knighthood.[1]

Haurchefant is sought out to locate Cid Garlond's missing airship, the Enterprise. Since Lord Francel de Haillenarte is under suspicion of heresy (and thus in no position to help them), he directs the Warrior of Light, Alphinaud Leveilleur, and Cid to Lord Haurchefant of Fortemps. Haurchefant is willing to look into the matter, but asks they help him get to the bottom of why Francel and his house have been caught with heretical ties. It is discovered someone has been framing House Haillenarte by planting draconian rosaries, and Haurchefant attempts to rescue Francel before he is executed for heresy at Witchdrop.

Once the execution is stopped and Francel is cleared of charges, Haurchefant reveals that the Enterprise landed in Stone Vigil after the Calamity. Since the Vigil was taken by the Dravanian Horde, he directs the heroes to Lord Drillemont de Lasserrant at Whitebrim Front.

The Warrior of Light later speaks with Haurchefant over a supply shipment the latter had sent to Revenant's Toll being waylaid by heretics. Heretic activity has been increasing lately under the leadership of a mysterious Lady Iceheart, and while Haurchefant promises to send a new shipment, he asks the Warrior of light to assist Drillemont in investigating the heretics. Haurchefant accompanies Alphinaud to the meeting with Ser Aymeric de Borel of the Temple Knights, and they learn of another ambush by the harriers on supply wagons.

Haurchefant provides refuge for the remaining Scions of the Seventh Dawn at Camp Dragonhead following the Monetarist plot, who stay in the Intercessory. He warns that a recent skirmish in the city-state from wyverns has put the Holy See on an extended state of high-alert, and so full asylum will have to wait. He promises, nevertheless, that House Fortemps will protect them from Ul'dahn agents.

Haurchefant assists in the rescue of Emmanellain from the Vanu Vanu fortress in The Sea of Clouds. When the Warrior of Light returns to Ishgard in unrest, he joins the party despite Lady Iceheart's presence and calls for the Temple Knights to fall back and aid the wounded. He brings the Warrior of Light to House Fortemps, where he learns the truth of Ishgard's history.

His loss is felt by many, especially by his father Count Edmont de Fortemps. He attempts to keep his composure by saying, "A knight lives to serve. To protect. To sacrifice. There is no greater calling..." but ultimately collapses in grief. The Warrior of Light later sees Count Edmont, who will help him or her with their mission despite his grief, as it is what Haurchefant would have wanted. Count Edmont gifts Haurchefant's broken shield to the Warrior of Light before their departure to apprehend the archbishop. The Warrior lays it upon his memorial at Providence Point.

During a final visit to Camp Dragonhead on the way to deal with the worsening situation at the Gyr Abanian border, the Warrior of Light finds that Emmanellain has taken over his half-brother's post as commander of the encampment with a large portrait of Haurchefant presiding over his offices.

When the Scions of the Seventh Dawn venture into the aetherial sea to speak with Hydaelyn, Haurchefant's soul manifests as his sword and shield to empower his friends.

On the eve of the Scions' departure to Ultima Thule, Haurchefant's half-brother Artoirel de Fortemps visited his grave.

Do not despair! You are not without allies.

Haurchefant's voice from the past

Haurchefant's voice is heard by the Warrior of Light in Ultima Thule, cheering them on as they walk alone towards the end.

Haurchefant is an Elezen with silvery hair, garbed in full chainmail. At the time of the events of Heavensward, Haurchefant is 28 years old.

Unlike many of his peers, Haurchefant is open-minded about adventurers and welcomes them to Dragonhead. Defying the usual stereotype of Ishgardians as being uptight fundamentalists, Lord Haurchefant is pleasant and always ready to offer words of encouragement or a smile to those in need. He is romantic about his ideals, but it is more likely his sincerity and loyalty show in flamboyant words and expressions. He describes the Warrior of Light as "hope incarnate", for instance. In the Japanese version, he often makes suggestive comments towards the Warrior regardless of gender. This was removed in the overseas releases.

Haurchefant fights alongside the party in three Main Scenario duties: during the rescue of Lord Francel at Witchdrop in A Realm Reborn, and twice more in Heavensward, during the rescue mission in the Sea of Clouds and when the Warrior of Light, Alphinaud, and Hilda the Mongrel are attacked by the Heavens' Ward in Foundation. In combat, he functions similar to a Gladiator—a sword-wielding tank.

Haurchefant appears as an NPC in the Dragonsong's Reprise ultimate raid. During the end of the first phase of the encounter, he will shield the party from Ser Zephirin's spear, quickly losing health until he perishes. Haurchefant has a Healing Down debuff, preventing the party from healing him during this sequence. Later on, the fight will rewind to this sequence, except the party now has access to a Level 3 limit break. The party must use a Tank limit break to protect Haurchefant from the spear damage, which also reduces the strength of the Healing Down debuff, allowing him to be healed. Afterwards, the party must defeat the Spear of the Fury to save Haurchefant's life and further progress the fight in its "alternate timeline" second half.

The achievement for completing the quest

The Sins of Antiquity allows the player to adopt Haurchefant's title, "Of the Silver Fuller". A portrait of Haurchefant called

A Knight to Remember can be purchased using Allagan Tomestones of Poetics. The

Wind-up Haurchefant minion is also awarded upon completing the quest

As Goes Light, So Goes Darkness. 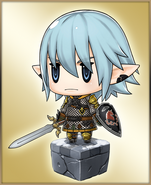 A knight of the noble House Fortemps and commander presiding over Camp Dragonhead. Haurchefant actively welcomes mercenaries and adventurers into the camp, and he seeks to shepherd his homeland of Ishgard through the trying times it faces.

Haurchefant is a playable character who he could be initially recruited during the Challenge Event The Dragonsong War - Dreams of Ice as a First Time Reward for completing the event's Akh Afah Amphitheatre stage on Classic difficulty.

Haurchefant appears as a Normal Mode card in the version of Triple Triad playable via Final Fantasy Portal App.

Haurchefant features in a sticker set for LINE, a mobile communications app. The set he appears in is "FINAL FANTASY XIV Vol. 2". 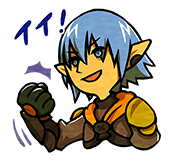 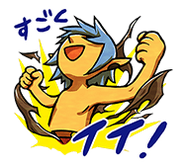 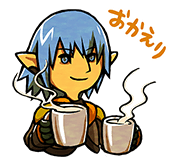 The Tales of the Dragonsong War, a series of short stories posted on the Final Fantasy XIV Lodestone, features a short story titled "Vows Unbroken", which offers a glimpse into Haurchefant's childhood and his relationship with Francel de Haillenarte.[1]

If the player visits Haurchefant's memorial, no music will play in proximity to the monument. Francel will also appear momentarily, offering his respects.

Square Enix's Eorzea Cafe served a dish called "Soup of Haurchefant" whose description translates to: A recipe treasured by the famous FF14 NPC, Haurchefant of the Silver Sword! After the Seventh Umbral Era, Coerthas was engulfed by blizzards. What became ideal for warming frozen bodies all the way to the core was... yes, hot pot! Having hot pot while surrounded by groups of seasoned adventurers is... fantastic! Simply fantastic!

Haurchefant is voiced by Masakazu Nishida in the Japanese version, Jason LaShea in the English version, and Choe Seung-hun in the Korean version. 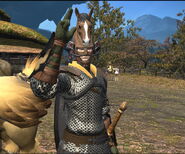 Confirmed on the official forum, Greystone is a surname given specifically to illegitimate children.