), also known as Hashmalum , is the fifth Lucavi demon that Ramza Beoulve must fight in Final Fantasy Tactics. Second-in-command of the Lucavi, he is associated with the Leo Auracite and has possessed Folmarv Tengille, leader of the Knights Templar of the corrupt Church of Glabados.

Hashmal appears to be a demi-human with long pale blond hair with two low short braids on each side and a lion-like face. He wears a dark blue sleeveless robe with matching wristbands on both wrists and has sharp claws on both of his hands.

Hashmal was responsible for killing most of the guards including Folmarv's son, Isilud in Riovanes Castle during a rampage after his negotiations with Duke Gerrith Barrington soured until he reverts back into Folmarv who had found Alma who is a suitable host vessel for his master, Ultima.

Later, Ramza fights Hashmal at the Airship Graveyard, where he is attempting to bring his master Ultima back to life. After receiving a wound from Ramza, Hashmal commits suicide to provide his own blood for Ultima's resurrection. This works, and Ramza must battle Ultima shortly afterward.

Hashmal's job is Regulator (PS)/Bringer of Order (WotL) in the game. He is level 59 with 70 Bravery and Faith, and has roughly 1425 HP and 790 MP. He is immune to all negative statuses except Blind, Slow, and Immobilize. He has several powerful attacks like Quake. 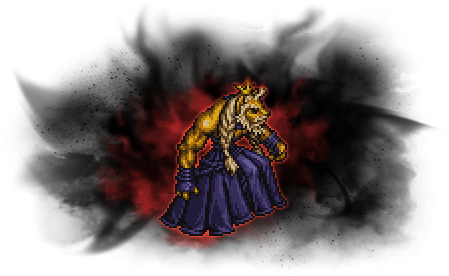 Hashmal's Zodiac Stone.
Add a photo to this gallery