Scion set by the gods to wield and manipulate the laws of this world, and with holy power lead mankind to order. Created in opposition to Fandaniel the Protector, scion of light. Desiring to bring order to all things, he joined with Ultima in her battle against the gods. He gave his body to the Thousand-Years War, and when his strength was spent, down into the burning inferno he fell.

Hashmal, Bringer of Order is a level two Esper in Final Fantasy XII. He is the fourth of five storyline Espers, and represents Earth.

Hashmal is associated with Earth, and is associated with the zodiac sign of Leo, the Lion. His head features feline traits, though he supports an overall humanoid shape. He has a long white mane and wears a golden horned headpiece, a dark green sash and trousers, codpiece and large knee braces. He wears shoes that resemble hooves. From his power of Earth, his color sign is green. He is also referred to as the Simha Ascendant, the Sanskrit name of its zodiac sign as used in Jyotish (Hindu) astrology.

Hashmal is based on a Lucavi from Final Fantasy Tactics, and returns in Final Fantasy XII: Revenant Wings as the Rank III Ranged Earth summon.

Hashmal is one of the five storyline Espers and is the fourth obtained. He is found at the Pharos, guarding one of the platforms leading up to the Sun-Cryst. The Occuria sealed him here to protect the Sun-Cryst from intruders. Princess Ashe and her entourage brave the tower to reach the Sun-Cryst and defeat Hashmal along their way to the top, gaining him as an ally.

After being fought as a boss at Pharos, Hashmal's license can be purchased for 50 LP.

Esper licenses sometimes unlock licenses that could not otherwise be reached. Hashmal's license will appear on all boards, but once chosen by a character, will disappear from all other boards. In The Zodiac Age version, the player can choose two license boards for each playable character, and activated licenses are activated on both boards if present.

Hashmal allows access to the following licenses on these boards: 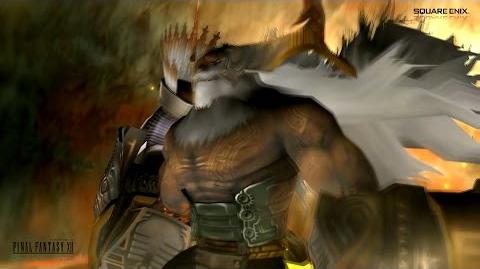 An Earth-elemental attack, and the only offensive Earth attack the player gets apart from certain weapons. In Japan, this attack's name is "Rock You".

An Earth-elemental attack, and Hashmal's ultimate attack. Hashmal descends beneath the earth, landing on a rock amid magma. He draws power into himself and jumps, smashing back through the surface. His leap breaks the earth into enormous chunks, smashing the enemies in range and unleashing torrents of lava.

Hashmal absorbs Earth and is weak against Wind, taking half damage from every other element.

Has Augments in Zodiac releases only.

Hashmal is fought in the Pharos. He is also fought in the Zodiac versions' Trial Mode at Stage 49 along with two Reavers. Hashmal uses Quakeja that hits hard and inflicts Petrify. Hashmal's standard attacks can deal a lot damage and can inflict Disease.

Hashmal appears as an ability card and as an enemy summoned by Meia that can be fought in multiplayer mode.

Hashmal's name and role are based on the Angel hierarchy of the Dominions, also known as the Hashmallim in the Jewish scrolls, who are tasked in regulating the duties of lower angels.

He is also referred to as the Simha Ascendant, the Sanskrit name of its zodiac sign as used in Jyotish (Hindu) astrology.

Hashmal's attack, Roxxor, is called "Rock You" in the Japanese version, as well as some other translations, such as the Italian translation. This is a nod towards the band Queen; one of game director Yasumi Matsuno's trademarks is to pay homage to the rock band Queen in his works.[1] Rock You has been changed to Roxxor in the English localization, a likely play on internet slang.