Scion set by the gods to wield and manipulate the laws of this world, and with holy power lead mankind to order. Created in opposition to Fandaniel the Protector, scion of light. Desiring to bring order to all things, he joined with Ultima in her battle against the gods. He gave his body to the Thousand-Years War, and when his strength was spent, down into the burning inferno he fell.

Hashmal, Bringer of Order (統制者ハシュマリム, Tōseisha Hashumarimu?, lit. Hashmalim the Ruler) is a creature from the world of Ivalice. Hashmal has appeared as an Esper of Earth, and as one of the Lucavi, and is associated with the zodiac sign of Leo, the Lion. His head features feline traits, though he supports an overall humanoid shape. From his power of Earth, his color sign is green. He is also referred to as the Simha Ascendant, the Sanskrit name of its zodiac sign as used in Jyotish (Hindu) astrology.

Hashmal is one of the five storyline Espers and is the fourth obtained. He is found at the Pharos, guarding one of the platforms leading up to the Sun-Cryst. The Occuria sealed him here to protect the Sun-Cryst from intruders.

Bringer of Order before whom mountains are as pebbles.

Hashmal is the Rank III Ranged Earth summon. Titan must be obtained before Hashmal becomes accessible on the Ring of Pacts.

Hashmal is fought in the Zwaua Rainwood, during Mission 62: Rumble in the Jungle. His primary attack, Roxxor, deals ranged Earth damage to a small area. His special, Stoneja, deals heavy earth damage to all foes in range, similar to Kytes's Stonega. Lluyd learns his Quickening, Fanfare, after defeating Hashmal.

Hashmal appears as a boss in the Royal City of Rabanastre raid as part of the Return to Ivalice series.

Hashmal, Bringer of Order, is the second-in-command of the Lucavi, and their leader for the time being.

Hashmal is dormant in the Leo auracite, which is held by the leader of the Knights Templar, Folmarv Tengille. Folmarv plots to resurrect the leader of the Lucavi, Ultima, whose host was the Saint Ajora Glabados, with the Virgo Stone. He finds a new host for the stone in Alma Beoulve, and kidnaps her.

Alma's brother, Ramza, defeats several of the Knights Templar and Lucavi during the War of the Lions, and infiltrates their base, the Necrohol of Mullonde, through the Orbonne Monastery. At the Airship Graveyard Ramza confronts Folmarv, who transforms into Hashmal to slaughter Ramza's forces and use their blood to summon Ultima. Upon being defeated, Hashmal sacrifices himself to resurrect his leader, and succeeds.

Hashmal returns as a Scion, along with the other Espers. He can be called via the Pin of Order. Hashmal's Wrath, Gaia's Wrath, deals heavy Earth damage to all foes. The Pin of Order can be obtained by completing the Fluorgis Cup. 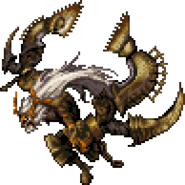 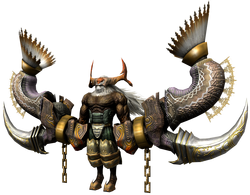 Hashmal appears as the core Earth-element Sicarius in the Ring of Braves multiplayer zone. He was the first to have a 3* form to fight. Hashmal is in the standard rotation for fighting elemental Sicarius. His ability card may be purchased from the moogle store using the materials won from fighting him, and is a single target Earth-element attack, one for each class. 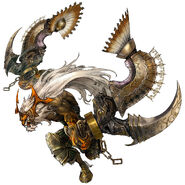 Artwork from Final Fantasy Tactics A2.

Hashmal's name and role are based on the Angel hierarchy of the Dominions, also known as the Hashmallim in the Jewish scrolls, who are tasked in regulating the duties of lower angels.

He is also referred to as the Simha Ascendant, the Sanskrit name of its zodiac sign as used in Jyotish (Hindu) astrology.