An ordinary harp that can be played by strumming its strings. Its convenient size makes it easy to carry for wandering bards, and thus many prefer it. Though some harps hold magical powers within, this particular harp is but a mere musical instrument. For this very reason, its effects rely completely on the performing skills and the songs of its owner, which can be said to make this hard difficult to handle.

Harp (ハープ, Hāpu?) is a recurring weapon in the series.

Harp is a string instrument that provides Minne +1. It can be equipped by level 14 Bard. It can be bought for 60 Sparks of Eminence from Isakoth in Bastok Markets (E-11), Rolandienne in Southern San d'Oria (G-10), Fhelm Jobeizat in Windurst Woods (J-10), and Eternal Flame in Western Adoulin (H-11).

Harp is the weakest harp, providing 2 Attack and 2 Magic Attack. It can be bought for 220 at Liberte and Urbeth (After Darkness). 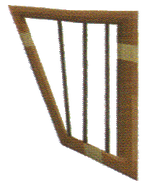