Final Fantasy Wiki
Register
Don't have an account?
Sign In
Advertisement
in: Characters in Final Fantasy IV: The After Years, Scholars
English

Harley is the secretary to the king of Damcyan. Though determined to become a scholar, she was enchanted by Edward's singing voice and became his secretary.

Harley is a playable character in Final Fantasy IV: The After Years. She is the secretary to King Edward of Damcyan, acting as an aide and emissary, and is a well-read and insightful scholar of the world.

Harley has pale skin, bright blue hair, blue eyes, and wears glasses. Her outfit consists of a dark coat with a green gradient held closed by several buckles, under which she wears an outfit with blue patterning, and dark boots.

Harley dislikes war and violence, and believes education and science will carry humanity to the future. She finds her duties under Edward stressful, but enjoys them nonetheless. She is inquisitive and is implied to be knowledgeable on many topics. Her research has even led to her discovery of Golbez's origins, and the hand the Lunarians played in humanity's development of magic and airships.

Harley is concerned for Edward, feeling he is neglecting his royal duties by passing them off to her and the Damcyan chancellor. She assists him to try and ease the burden of rule while he still grieves for Anna and Tellah. In Edward's Tale, when Edward went alone to get a Sand Pearl to heal her from her desert fever, he was in bed recovering, and in that scene, it may imply she had feelings for Edward. When Edward confesses to her he is considering giving up the harp as his playing is not pure while he still clings to his past, Harley tells him it does not matter, as others find hope in his music, and tells him that after her parents died during the wars of Final Fantasy IV, his playing gave her hope to keep living and inspired her to come to Damcyan to serve Edward.

Harley's diary mentions she received her education and training in Troia when she was young.

A year after the events of Final Fantasy IV, Harley is taken as "Secretary-in-Training" for King Edward, appearing briefly during the celebration for the reconstruction of Damcyan.

Harley accompanies Edward to Baron after a messenger sent by Cecil acts strangely. On their journey Harley is afflicted with desert fever. Edward goes to retrieve the Sand Pearl to cure her, but is attacked by bandits. He escapes and Harley recovers. During the night, Edward is visited by Tellah's and Anna's spirits. Tellah tells Edward that Anna wants him to find happiness, insinuating he should move on from the past and find a new lover.

In the morning, Edward thanks Harley, possibly hinting at romantic feelings for her. They sail to Baron and have an audience with Cecil. Edward secretly leaves some Whisperweed in his throne room and on the voyage back to Damcyan, Harley and Edward eavesdrop on a conversation between Cecil and the Mysterious Girl. Upon returning home, Rosa hides at Damcyan's castle before Kain arrives to steal their Crystal for Baron. Edward leaves with Cid to rescue Rosa, who was abducted by Kain after the attack.

At Damcyan, Harley worries for Edward's safety at Baron. She recognizes Rydia of Mist, and requests she goes with the party. Edge refuses at first, but allows her to accompany them on the Falcon until she sees Edward again. The party believes her information as a scholar will assist them, regardless.

When the party chases the Maenads to the True Moon, Harley speaks with Edward in the Subterrane. She asks him to play a song to ease her fears, but he refuses, claiming his harp will not do much good and that he should abandon playing it altogether. Harley convinces him not to give up.

After the Creator has been felled and peace returned to to the world, Edward speculates Damcyan's Crystal is different from any other Crystal the Creator made, because it has recovered its light faster than the others. Harley asks if he is suggesting the Crystal is evolving. Edward says it is, in a response to the evolution that took place in their hearts. They leave with the Chancellor to begin preparations for rebuilding the world.

Dummied content indicates Harley was to have the ability "Knowledge", which would have increased the power of attack items. There is also a dummied Blue Magic command belonging to an unknown character. Given that Harley's equipment consists of mage-type weapons and armor, and her high Intelligence, the command may have been meant for her.

Harley has all-around poor to average stats, with only her Intelligence standing out, though it is outclassed by the Black Mage-type characters, and she has limited practical applications for it. The limited uses of her abilities and small pool of equipment and Band abilities greatly limits her effectiveness.

Harley has Piercing Sight and Gil Toss. Piercing Sight can give an enemy a new weakness and casts Dispel. This doesn't work on bosses. Gil Toss does damage by throwing gil at all enemies based on Harley's level, and also by her weapons' Atk power. Gil Toss is unaffected by enemies' defense, particularly Flan, so they receive tons of damage. Since Piercing Eye gives new weaknesses, she can team up with Ursula's Tenketsu, or black mages to make an exploitation of monsters' weaknesses. Her Economic Ring makes her an apothecary.

Harley can equip a variety of light armor and weapons, allowing her to be geared towards either a physical fighter or a mage. In Edward's Tale, she joins with a Whip, a Leather Cap, Leather Clothing and an Economical Ring.

The weapons she has to choose from are typically weak and she has no magical abilities, so she is unable to capitalize on her flexible equipment options. The player can get her to do more damage than Ceodore and many other physical based characters by giving her the Mystic Whip/Artemis Bow, White Tiger Mask and the Minerva Bustier. 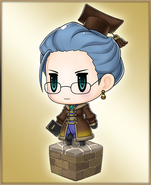 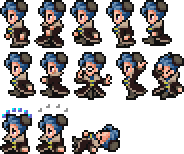 [view · edit · purge]Harley is an English name for either gender that means "Spacious Meadow" or "From the Meadow". Another possible meaning is "hare" from the Old English word hara.

Her Japanese name is Haru, which means "Spring".