This straight-bladed sword looks like a bar of solid iron and is about as subtle.

The Hardedge (ハードブレイカー, Hādo Bureikā?, lit. Hard Breaker) is a recurring weapon in the Final Fantasy series. It is a sword, more often than not, a greatsword. A hard-hitting weapon, it is usually a weaker or average weapon in among the other swords in its class. It often confers an immunity to Doom.

The Hardedge is a weapon for Cloud. It can be bought in Junon (disc 1) and Gongaga (all discs) for 1,500 gil, and stolen from a SOLDIER:3rd during the visit to Shinra Building. It has Attack power of 32, Hit rate of 96, Magic power of 6, and normal Materia growth with four Materia slots, two of them linked.

The blade has the kanji (一刀両断, Ittō ryōdan?, lit. one-bladed bisection) written on it, a Japanese term for "cutting into two with a single stroke".

The Hardedge is the strongest physical weapon for Cloud. It provides the Infinity's End ability that has slow buildup and high ATB cost, but tremendous burst damage. Its Magic Attack attribute, however, is significantly lower than most of Cloud's other weapons.

This sword is as straight and heavy as an iron bar.

The Hardedge is a greatsword and has the special effect of nullifying Doom and is equippable by Soldiers and Paladins. It adds 42 to Attack and teaches no abilities. It can be obtained by raising Smithing to level 5 or as a random reward for completing a mission.

The Hardedge is a greatsword which provides +46 Attack and immunity to the Doom status. It teaches Tenacity to Ravagers and Charge! to Lanistas, and can be bought for 5,400 gil in the shop after creating it in the Bazaar after using a Zodiac Ore, Great Serpent's Fang, and Danbukwood.

Hardedges are a pair of handguns for King. They provide 12 Attack Power and can be bought in the town of Cetme for 2,000 gil.

The Hardedge is the second weakest greatsword, giving a 10% physical damage increase. It can be obtained from the shop by trading 1,830 gil, a Longsword, a Gale Shard, and Transmogridust x2.

The Hardedge is a level 1 greatsword that provides +20 Attack, -2 Defense, and +3% Physical Damage. It can be obtained by trading 9,300 gil, a Longsword, and a Mithra Tooth.

The Hardedge is one of Cloud's unlockable weapons, and resembles the weapon's appearance from Final Fantasy VII. It can be obtained either by random chance when redeeming a Treasure token, or by purchasing them from the Shop for 7,200 Gil. Like all other characters' weapons, having it equipped carries no advantages or disadvantages.

A sword for those who prefer the direct approach. It cuts, rends, and cleaves.

Hardedge grants +1 to Attack. It can be equipped by Knight, Mystic Knight, Cecil, Bartz, Cloud, Squall, Seifer, Steiner, and Vaan.

Cloud with the Hardedge for Puzzle & Dragons. 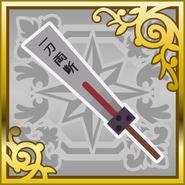 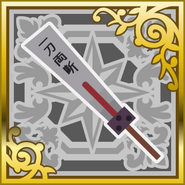