Yeah, well hell's not sounding too bad. 'Cause this place ain't exactly paradise.

The Hanging Edge[note 1] is a location in Final Fantasy XIII. It is a series of highroads and railways at Cocoon's outer rim. It used to be a bustling metropolis but was abandoned after the War of Transgression, and has since been a restricted zone, blocked by barriers only authorized vehicles can pass through. It comprises the first chapter and as the Crystarium system is yet to be unlocked, enemies fought here give no experience.

A relic of days before the War of Transgression, the Hanging Edge is located near Cocoon's outer rim. The area was once a thriving urban center, but residents were forced to abandon the location when an attack by Pulsian forces cracked Cocoon's shell during the conflict several centuries ago. It was since designated a restricted zone and, with civilian access prohibited, soon became nothing more than a name on local maps.

Lightning and Sazh Katzroy enter the Hanging Edge on the Purge train carrying the exiles from Bodhum to Gran Pulse. They derail the train before fighting their way through hordes of PSICOM soldiers to try and reach the Pulse Vestige where Lightning's sister, Serah, is being held captive by the fal'Cie Anima.

Elsewhere, the resistance group NORA fights against the Purge, which aims to send all the citizens and tourists from Bodhum to Gran Pulse because a Pulse fal'Cie was discovered in the area two days before. Snow Villiers, Gadot and Lebreau from NORA enlist a number of volunteers including Nora Estheim. After one of PSICOM's ships blasts a highway, many fall and Nora's son, Hope Estheim, watches as she loses her grip on Snow's hand and falls to her death.

The Pulse Vestige is brought into the warzone by the Palamecia amid the chaos. Lightning and Sazh make their way to the Vestige while Snow and Gadot survive the fall and rejoin the rest of NORA. Snow sets off to rescue his fiancée Serah from inside the Vestige using one of PSICOM's airbikes. Gadot stays behind to keep an eye on the citizens, but Hope and a girl named Vanille steal Gadot's airbike to follow Snow into the Vestige. Hope plans to confront Snow about his mother's death and make him pay for it.

Lightning, Sazh, Snow, Hope, and Vanille meet at the heart of the Vestige where they find Serah collapsed on the floor. Snow and Lightning rush to her aid and Serah whispers her final wish for Lightning to save Cocoon, before turning into crystal. The group makes its way to the fal'Cie Anima and Snow begs for it to turn Serah back before Lightning attacks it in a grief-induced rage. The group fights Anima, after they are marked with the brand of a Pulse l'Cie.

PSICOM destroys the Pulse Vestige with their weapons while the party is all inside. As Anima dies the Vestige sends outs an energy wave that destroys the Hanging Edge and is sent falling towards Lake Bresha below, crystallizing it on impact. While trekking through Lake Bresha, the l'ie find old ruins that resemble the architecure of Hanging Edge, called "A City No Longer".

When the Purge train containing Aoede comes to a halt at the Hanging Edge, an explosion sounds in the distance. The Purgees revolt against the PSICOM soldiers, taking their weapons and escaping. After removing her Purge clothing, Aoede leaves the train car and steps onto a skybridge, seeing the Hanging Edge turned into a warzone. She witnesses Sanctum attack ships directing their gunfire at the rebelling Purgees and realizes the Sanctum never intended to exile them from Cocoon, and that the Purge is a way to cover up their plot to take the supposedly tainted civilians to the restricted area and enact a concealed genocide.

An attack vessel locks on to Aoede, but she is moved out of the way before the pilot fires, and she escapes with her saviors, the members of NORA. The Pulse Vestige is suspended beneath the Palamecia, and Aoede focuses her camera on the Vestige and records that NORA's leader, Snow Villiers, is heading towards it. Aoede asks NORA to let her go with them, and they accept her into their group. Aoede decides to record everything that happens. Even if she sacrifices herself in the name of journalism, there is the chance her footage will get circulated and serve to shatter the public's blind faith in the Sanctum.

Aoede thinks the Sanctum must have known they wouldn't be able to hide the truth about the Purge. Aoede believes the Purge is the beginning of a huge conspiracy, one that will kill even more people. Guided by NORA, Aoede and other surviving Purgees escape the battlefield and take refuge in a crevice in the ground. After breaking through PSICOM's defenses, Aoede, NORA, and a portion of the surviving Purgees, escape the Hanging Edge and hide inside an ancient Pulsian building that was inserted between the layers of Cocoon's outer shell during its construction.

The Hanging Edge can be seen as an apocalyptic vista in the trial known as the Altar of Salvation in the Luxerion Cathedral.

It's the piece we played live at a game event in 2008. As I was given the direction to use "hybrid music" for FF13, "Blinded By Light" was a consolidated piece of violin solo, guitar and orchestra (and more), while this one is based on strings, piano and synthesizer. For a hybrid piece, it seems like the live feel of it is too overwhelming given the arrangement and number of the tracks. However, by adding a minimal mood, it comes closer to the synthesizer side, which I think creates a good balance For these minimal 8 minute string and 16 minute piano pieces, I kept the rough sound of the initial random play and developed from there. The delayed "whang!" of the piano sound just before the loop is used from time to time, which could almost give the impression of it "almost not being able to catch up with the tempo", but it's all intentional. This is my favorite part (laugh).

The tracks that play as background themes of the Hanging Edge are its eponymous theme, "The Warpath Home," and "Snow's Theme". 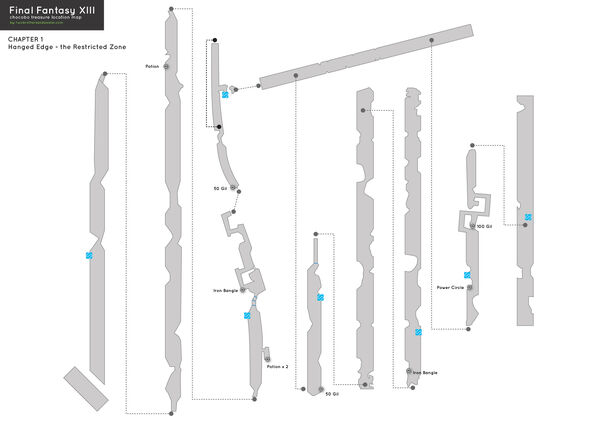 The Hanging Edge appears as the BMS for "Saber's Edge" and "Defiers of Fate", the latter only playable during a "Dark Note".

The Hanging Edge is the BMS for "Defiers of Fate", "Saber's Edge" and "Blinded By Light".

The Hanging Edge is the first dungeon in the XIII world. Clearing it obtains Snow.

Under rule of the Sanctum, the people of Cocoon knew peace and prosperity. The story of this realm begins as a train carrying Lightning speeds towards the Hanging Edge... 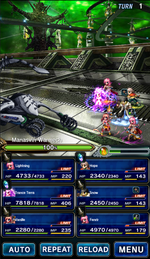 Hanging Edge was the only location that existed in a complete stage in the game's early PlayStation 2 incarnation.[citation needed] According to the developers, a model of Yuna was used as a placeholder for several NPCs whose models were not complete at the time of testing.[citation needed]

When the player follows Snow's storyline for the first time they can find a woman muttering "I will face my fear, I will permit it to pass over me," which is part of the litany against fear in Frank Herbert's Dune.

The entrance to the Hanging Edge.

Gameplay view of the Hanging Edge.

Lightning running through the Hanging Edge.

The Palamecia carries the Pulse Vestige though the Hanging Edge.

The Hanging Edge is destroyed.

Artwork of Lightning and Snow at the Hanging Edge.

Artwork of the train-line leading towards the Hanging Edge, as seen in the game's intro.

Artwork of the train rail through the Hanging Edge. 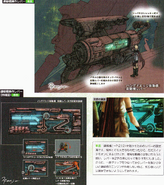 Concept art of an apparatus. 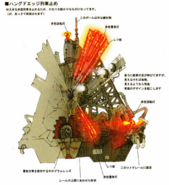