Interested in an inspection? Haul her down to Hammerhead! We pride ourselves on attention to detail. No job too small!

Hammerhead is a gas station and repair shop in Leide region in Final Fantasy XV. The locale is owned by Cid and his granddaughter Cindy. Hammerhead employs a large yellow tow-truck driven by Cindy to help those stranded on their journey, such as Noctis Lucis Caelum's party.

Hammerhead has a gas station and a chocobo rental post. Filling up costs 10 gil, and if the player fills up at Hammerhead Cindy will do it rather than Noctis. She will also wipe the player's car to clean it. The rent-a-bird can be used after the chocobo rental services have been unlocked by visiting Wiz Chocobo Post in Duscae.

Next to the arms vendor, on a canister.

Unlike most service stations that cater only to customers of the automotive variety, Hammerhead offers food and trinkets for their drivers as well. Coupled with Cid and Cindy's frank-but-friendly conversational style, this outpost serves as an oasis that soothes the souls of roadsters weary of the Leiden plains.

First-time visitors beware: if you wish to remain on Cid's good side, refrain from asking about the origin of the garage's name.

Hammerhead was established by Cid Sophiar, the former mechanic of the royal household in Insomnia. After his son and daughter-in-law perished, Cid raised his granddaughter Cindy at the garage, who picked up his love of automobiles. Cid helped Takka establish himself by letting him run a diner by the service station. After business started to decline, Cindy managed to bring it back[1], and in time would take over from Cid as the head mechanic.

After their car, the Regalia, breaks down, Prince Noctis and his friends push it to Hammerhead for repairs. They meet Cid and Cindy, and learn Cid is King Regis's old acquaintance. Noctis's friend Prompto Argentum becomes instantly infatuated with Cindy. They help out the locals until the car is fixed, and head off toward Galdin Quay with a delivery from Cindy as a favor for help. When staying at a nearby campsite Prompto comes up with an idea to photograph Cindy from afar, but when he and Noctis head to Hammerhead in the early morning they run into her on a morning hike. Noctis must act as Prompto's wingman as he tries to impress her.

After the world is plunged into perpetual darkness after Noctis goes missing, most locations are abandoned as daemons run amok, Cindy and Cid are forced to abandon Hammerhead and make their way to Lestallum. Cid refuses to abandon Hammerhead, however, and at some point it is taken back and becomes a post for daemon hunters. Cindy still runs the garage, busy as ever.

Noctis and the older Talcott arrive in Hammerhead when the latter picks up Noctis along the way. Here, Noctis meets up his friends. The four prepare for their journey to Insomnia where Noctis will defeat Ardyn and restore light in the world.

Hammerhead has a caravan as a lodging where the player can stay overnight. It costs 30 gil and yields x1.2 EXP rate. Sometimes Cindy sits with the party outside the caravan in the lodging cut scene.

Our spicy jambalay'll have you jumpin' for joy and scamperin' for seconds! Give it a taste!

Note on the window of Takka's Pit Stop

While at Hammerhead the party has a chance to meet Takka who runs the diner, Takka's Pit Stop, and is the local tipster. Takka was once taken in by Cid who helped him get his life back on track.

In Chapter 14, the player can find the two final reports here.

The shop is at the petrol station, in front of the gas pumps. The player can look at the magazines on the table here for info about dualhorns, and Noctis notes the shop is out of Ebony, Ignis's favored beverage.

The Mini-Mart is still around, now operated by a hunter rather than the clerk who worked there before.

Culless Munitions is a weapons vendor operating from a black Culless Munitions van at the Hammerhead parking lot opposite the petrol station. Sania Yeagre appears here in Chapter 1, although the player can't yet talk to her.

Culless Munitions is still around in Chapter 14 and sells new stock. The player can't return to the shop once they leave Hammerhead.

Cindy is enamored with the Regalia, a custom vehicle of crown city make, and comes up with various ways to upgrade and customize it if the party brings her the required materials.

There is also a Hammerhead decal for the Regalia as a reward for Cindy's The Ever Elegant Regalia quest.

Takka sends the party out on quests to gather ingredients for new dishes he has planned. Afterward, the dishes become available to buy at his restaurant.

Cindy sends the party out to various quests for items that can be used to upgrade the Regalia.

Cid can upgrade Noctis's weapons if he brings him the required materials. After giving Cid the weapon, the player must complete a quest and then rest to get a call from Cid to pick the upgraded weapon up. After a certain point in the story, Cid will relocate to Cape Caem. Cid is found back at Hammerhead if the player uses Umbra to go back in time in the later chapters.

The hunt for jormungand becomes available after the player has cleared the Crestholm Channels optional dungeon. The hunt for adamantoise is available when returning to Lucis from Chapter 9 onwards.

Eating Chili con Carne at Takka's Pit Stop teaches Ignis Burly Bean Bowl. It is one of Prompto's favorites. Eating Hammerhead Hot Sandwich teaches Grease Monkey's Schnitzel Sandwich, one of Noctis's favorites, but the player must complete a quest to procure garula meat for Takka for it to become available. Eating Sizzling Humongo-Steak teaches Thick 'n' Juicy Steak, but the player must fell a catoblepas as part of a quest for Takka.

There is a drawing in Takka's Pit Stop of Cid, Takka and Cindy drawn by an artist who resides in Altissia.

The background theme to Hammerhead is simply called "Hammerhead". It has a different version for Takka's Pit Stop, and the music transitions seamlessly when the player enters the restaurant.

The Hammerhead Service Station appears as part of the Noctis DLC package. It is Noctis's home stage.

A gas station on a desert region was first glimpsed for Final Fantasy Versus XIII, the game that ended up being reworked into Final Fantasy XV. Roberto Ferrari's concept artwork for Cid Sophiar shows a different logo for the garage, depicting a literal hammerhead shark.

According to Game Informer, at the Hammerhead station an instrumental version of Neil Young's "Heart of Gold" played in the background in a pre-release version of the game.[2]

The only time it rains in Hammerhead is during Chapter 1 when Noctis and his friends attempt to return to Insomnia. Afterward, if it rains and the player drives toward Hammerhead, the rain will disappear but will reappear as soon as they leave the area of Hammerhead.

The player can repeatedly rest at Hammerhead in Chapter 14 to get various bits of incidental dialogue with the party members talking about what they have been up to: Gladiolus telling the party about his girlfriend; Prompto asking Gladiolus for tips for picking up women; and Prompto growing independent and able to hunt daemons alone. 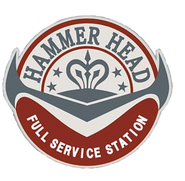 Talcott at Hammerhead in Chapter 14.

Hammerhead sharks is a group of sharks so named for the distinctive structure of their heads, which are flattened and laterally extended into a "hammer" shape. The shark appeared in an early version of the establishment's logo, and is present in the shape of the building structure itself.

The name befits the establishment for being a workshop, and likely alludes to Cid having wielded a hammer in his youth, as the Almanac suggests he does not want to discuss how he came up with the name for the garage. Once Cid upgrades the player's Engine Blade III to the Ultima Weapon, he will give Noctis his Old Hammer, which Regis carved with "Property of Mr.Hammerproof Thickskull." This was the weapon Cid used during his adventure with the Regis, but it is not usable in battle, and instead is a key item.