The Hammer Blow consists of Barret running up to an enemy and striking it.

Hammer Blow is obtained by using Grenade Bomb eight times. Barret can equip the Cover Materia to speed this up, allowing him to sustain more damage and thus use the ability more often. The forest in the Nibel Area past Mt. Nibel is also a great opportunity to level this ability quickly; the Battery Cap enemies are fought in large waves and their laser attack can increase Barret's Limit gauge quickly, while the Valron fought there has Gravity-based attacks that can increase Barret's Limit quickly without killing him. 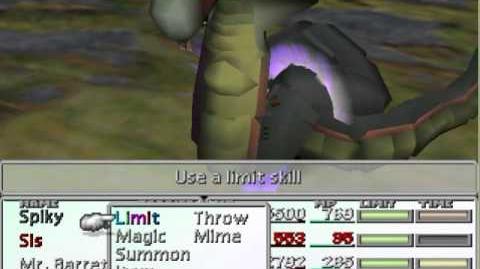 Hammer Blow inflicts Instant Death on one enemy. This will either kill it or fail if the enemy is immune to Instant Death. Hammer Blow can be useful for taking out targets quickly or destroying powerful single targets. However, it is not useful against bosses, and cannot destroy multiple targets at once. In both these cases, Grenade Bomb is a better choice.

Later on in the game, more and more normal enemies become immune to Instant Death, meaning Hammer Blow falls off in terms of utility. Therefore, it is better to equip Barret's level 3 Limit Breaks when they are available to him. The player can also get the same effect by summoning Odin, which hits all targets and usually works.