Hammer Blaster is an enemy in Final Fantasy VII fought in Shinra Bldg. They can also be fought during the return to Midgar at the end of the game, but at this point they are harmless.

-Abilities whose names are not shown when used are highlighted in italics.
-Vanish and Appear are battle animations.
-*Becomes invisible at any time of battle.
-**Invisibility wears off after a certain amount of time.
-***Hammer Blaster never use Zip Hammer, Zip Confu, Flying Hammer, Flying Muddle, Flying Zip, Flying Zip Confu.

Hammer Blaster can be a minor nuisance as it can temporarily leave the battlefield for a short time. While invisible it cannot be targeted, so the player must be careful not to attack, to avoid hitting their own party members. Although Hammer Blaster has eight attacks, it will only ever use two of them under normal circumstances; Hammer Blaster will never use the moves Zip Hammer, Zip Confu, Flying Hammer, Flying Muddle, Flying Zip, and Flying Zip Confu. It has Hammer Attack as standard physical attack. Also it will use Muyddle Mallet to inflict minor damage and possibly confuse a character.

Hammer Blasters can be easily defeated with Lightning attacks.

If (Self == Hammer Blaster B) Then

Use Muyddle Mallet on random opponent without Confusion

Use Hammer Attack on random opponent

If (any opponent does not have Confusion) AND (Random[1..SpecialChance] == 1) Then

Use Muyddle Mallet on random opponent without Confusion

Use Hammer Attack on random opponent 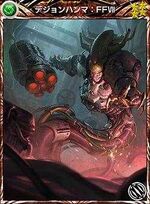 This section in Mobius Final Fantasy is empty or needs to be expanded. You can help the Final Fantasy Wiki by expanding it.
Retrieved from "https://finalfantasy.fandom.com/wiki/Hammer_Blaster?oldid=3310133"
Community content is available under CC-BY-SA unless otherwise noted.