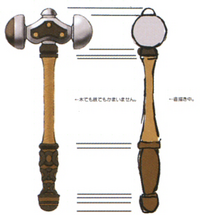 A hammer made for battle.

The Hammer (とんかち, Tonkachi?) is a recurring weapon from the Final Fantasy series. It is a basic weapon, often being the first hammer in the game.

The Hammer is the weakest hammer and the first the player can acquire. It can be equipped by the White Mage, White Wizard, Warrior, Knight and Ninja, and can be bought in Cornelia and Pravoka.

The Hammer is lightning-elemental and is exclusive to the Viking and Onion Knight jobs. It can be found in the Amur Sewers. In the original NES version of the game, the Hammer is dummied out, and is only obtainable with an Item upgrade glitch.

The Hammer is the default weapon of Luca, and can also be equipped by Cid, Gekkou and Golbez. It provides 20 Attack, 30% Accuracy, and as with all hammers deals higher damage against Machines.

The Hammer is the weapon of choice for Cinna, and is one of the weakest weapons. While the player can acquire the Hammer by collecting all thirteen Stellazzio coins, it cannot be equipped by any other character and its only purpose is to provide an extra scene in the ending sequence (provided it stays in the inventory), or be used as a Synthesis item to make the Tin Armor, Steiner's best armor piece.

The Hammer is the most basic Strength-powered weapon in the game, with 50 uses and an attack power of Strength x2. It can be bought in Town of Hero and South Town for 25 GP.

The Hammer is the most basic Strength-powered weapon in the game, with 50 uses and an attack power of Strength x6. It can be bought for 50 GP in First Town. It increases a Robot's HP by 9 and increases their Str by 2.

A hammer from the distant world of Gaia. It was once owned by a member of the Tantalus Theater Troupe. It is said that this hammer could be obtained by collecting a full set of coins hidden across the land, each of which bears the name of a constellation.

Hammer is a crafting material obtained during the Final Fantasy IX event, Silver Dragon. It is required to upgrade the Pumice Piece to Pumice Piece+.

This section about equipment in Final Fantasy Trading Card Game is empty or needs to be expanded. You can help the Final Fantasy Wiki by expanding it.

This gallery is incomplete and requires Final Fantasy IV: The After Years (Wii) added. You can help the Final Fantasy Wiki by uploading images.
Blunt weapons
Community content is available under CC-BY-SA unless otherwise noted.
Advertisement