Halloween - Night of the Pumpkin

Halloween - Night of the Pumpkin

October 21 - November 4, 2016
Halloween - Night of the Pumpkin was a Global-exclusive event in Final Fantasy Brave Exvius.

As dark clouds gather in the sky, candles are lit and pumpkins are carved... The long awaited Halloween season is here.

King Mog loves Halloween, and this year he has decided to hold a contest to see who could present him with the most delicious candy corn, the winner of which would be generously rewarded.

However, the Pumpking Reaper has seen this as the perfect opportunity to strike, and has gathered his undead friends to steal all the candies from the people.

Can Rain and his friends put a stop to these troublemakers before they ruin Halloween?

Candy Corn within the event period. From the dimensional vortex, players had defeat waves of undead monsters to obtain candy corn. By completing "Castle of the Dead" stages, they unlocked the "Pumpkin Rider Strikes" stage of the same difficulty.

Castle of the Dead[]

Main article: Castle of the Dead 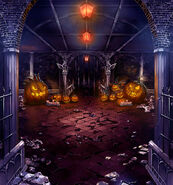