I once knew a girl whose only wish was to be carried in her uncle's arms. Her Majesty is a woman grown now.

Marquis Halim Ondore IV is a non-player character in Final Fantasy XII. Ruler of Bhujerba, he strives to keep the city neutral. Ondore follows the orders of the Archadian Empire while secretly allying with Resistance forces. He commands an airship, the Garland.

Ondore is a slender hume who stands at about the same height as Basch fon Ronsenburg and Balthier. Although but middle-aged, his hair is white and his face unusually gaunt for a man of his station, suggesting a burden on his person that has aged him beyond his years.

Befitting his status as the ruler of Bhujerba and its sky continent, Dorstonis, Ondore wears a long saffron-yellow coat with a high open collar, gray vest, and pure white sides, over fine dark clothes and white boots with blue tassels (and presumably armor, as he wears leg guards). The back of the coat is embroidered with elaborate silver designs and bears a coat of arms on hip-level on both sides–either his family's or Bhujerba's, or a combination—declaring his stewardship over the skycity. He wears a black bow-tie with a turquoise jewel and often carries an extravagant walking stick.

Despite the constant hounding by the Archadian Empire, Ondore maintains his dignity and pride, stressing his rank and independence, and is not shy to remind Judge Magister Ghis that he is not one of Archadia's puppets. Still, he displays a long-suffering manner that speaks of his great patience. Becoming of a ruler of a state of miners, engineers and merchants with limited military resources, Ondore disdains war, preferring negotiation and trade, but if his hand is forced, he will "show no quarter," as Reddas notes, suggesting that his patience and pacifism barely outweighs his temper and pride. His wearing of armor (parts at the least) also reinforces the image of a cautious man who avoids risks and gambles if possible, as it would make a possible assassination of his person much more difficult.

Ondore has known King Raminas and his daughter Princess Ashe of the Kingdom of Dalmasca since she was young. Ashe refers to him as "Uncle Halim" as he and King Raminas are sworn friends, their closeness resulting in young Ashe's affection.[2] In the Japanese version, Ashe refers to him as Oji-sama, the equivalent to "uncle" and an honorific toward middle-aged men. Ondore does not treat Ashe like a child, giving her no special treatment and respecting her views, and thus they clash on some of their ideals.

Ondore leads Bhujerba, a skycity independent from Archadia. Due to Bhujerba's neutrality, Ondore worked as a mediator in the peace negotiations between Dalmasca and Archadia. He announced the deaths of Princess Ashe and Captain Basch fon Ronsenburg due to a request from Vayne. Though he couldn't tell Vayne's motive at the time, he later realized Vayne was trying to make Ashe doubt the Marquis, preventing her from seeking his aid.

Ondore entered a secret collaboration with Vayne to provide him and the Draklor Laboratory with magicite from the Bhujerban Lhusu Mines. This was to be done behind the Emperor Gramis Gana Solidor's back. It is hinted Ondore was forced into the deal, though he retains his stance of not being the Empire's puppet.

After escaping the Nalbina Dungeons and having discovered that the Rabanastran Resistance faction will not help him, Basch seeks Ondore's help to save Ashe, who is being held captive by the Empire aboard Judge Ghis's Dreadnought Leviathan currently docked at the skycity. Once in Bhujerba, the party spreads rumors of Basch still being alive to catch the Marquis's attention.

Once the party meets Ondore he wants to help Basch in his plight but doesn't want to compromise his position. Instead of direct aid, he sends the party off to Dreadnought Leviathan to save the Princess, while simultaneously appearing acquiescent to Ghis. In the manga version, Vossler York Azelas, the Resistance leader who denied Basch aid earlier, visits the Marquis to tell him he does not trust him, but Ondore explains he had Basch's party taken captive so they could save Ashe, and implores Vossler to have faith in him and Basch both.

The party saves Ashe with Vossler's aid who comes onboard disguised as an Imperial soldier and returns to Bhujerba. Ondore is unwilling to support Ashe to claim Dalmasca's throne for she has no proof of her lineage, and thus would struggle to be recognized as the rightful heir. Ashe gets the sky pirates to "kidnap" her, and escapes Bhujerba.

Ondore secretly funds a local Bhujerban resistance faction and emerges as their leader, commanding their flagship, the Garland. While he holds talks with the Archadian Judges, and acts as mediator for Archadia and other nations, he wants to bring down the oppressive Empire and even considers using nethicite to force Archadia to sign a peace treaty.

After the Dreadnought Leviathan has been destroyed by the Dawn Shard, Ondore steps down as Marquis and leaves Bhujerba citing sudden illness. His true motive is to gather the loose Resistance factions to form an army strong enough to oppose the Empire. He seeks Reddas's help in Balfonheim and recruits him to steal nethicite from the Draklor Laboratory, but this plan fails. Ondore then seeks aid from Rozarria.

War between the Empire and the Resistance breaks as the Battle above Rabanastre, with Ondore leading the Resistance, and Vayne Solidor leading the Imperial forces aboard his Sky Fortress Bahamut. The war ends in Vayne's defeat and his younger brother Larsa Ferrinas Solidor succeeds him and calls for a ceasefire. After his goal has been fulfilled, the Resistance disbands and Ondore returns to Bhujerba.

Ondore narrates the storybook sections of the game, written in his book Memoirs of Mqs. Halim Ondore IV. This is similar to how the story of Final Fantasy Tactics is narrated from the Durai Papers; both games take place in Ivalice. The first narration by Ondore is chapter 12 of his accord, which may be an allusion to the number twelve, a recurring theme in Final Fantasy XII.

Ondore is voiced by Tom Kane in English and speaks with a British-Indian accent. He narrates the game's storybook sections, excerpts from his book Memoirs of Mqs. Halim Ondore IV. He is voiced by Akio Nojima in the Japanese version. The translators have named Ondore, and particularly his interstitial pieces, as one of their favorite for having written, although the interstitial pieces themselves were added late and were "translated in hotel rooms or on lunch breaks."[3] 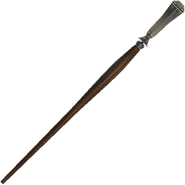 Ondore in the manga adaptation.