Hades is a Summon Materia in Final Fantasy VII. It summons Hades, who performs the attack Black Cauldron that deals non-elemental damage to all targets. More notably, it has 100% chance to inflict Sleep, Poison, Confusion, Silence, Frog, Small, Slow, and Paralyzed, to all enemies that are not immune.

Hades is also one of the available summons in the "Battle Square" demo version of the PC port.

The Hades Materia is found in the sunken Gelnika.

Hades costs 150 MP to summon, and performs Black Cauldron. This attack first deals non-elemental damage to all enemies at 5.625x the base magic damage, and then inflicts a variety of statuses: Sleep, Poison, Confusion, Silence, Frog, Small, Slow, and Paralyzed.

The status effects inflicted are the main component of the attack, and the non-elemental damage is merely an added bonus. Black Cauldron can cripple a lot of enemies with the status ailments, and unlike similar Magic spells, it has 100% chance of working, providing the enemies are not immune.

Hades can be paired with the Added Effect Materia, to either provide immunity to all the status effects, or a chance to inflict the ailments with physical attacks. The immunity can be especially useful if the player has not obtained a Ribbon yet or wishes to have something else in a character's accessory slot (though it doesn't protect against as many statuses as a Ribbon). The drawback is that the Hades Materia comes with considerable stat changes, of -10% HP, but +15% MP, +4 Magic, and +4 Magic def. The only penalty is to HP, but the stat changes are only useful for magical attackers. This means it may be best given to characters with a high Magic stat, such as Cloud, Red XIII, Yuffie, Cait Sith, and Vincent. Barret can also be a great choice, as Hades can hold a large amount of AP, which Barret's Missing Score ultimate weapon benefits from.

The Bad Breath E.Skill also inflicts the myriad status ailments to all targets at 100% accuracy, but costs much less MP.

Hades as it appears during Black Cauldron 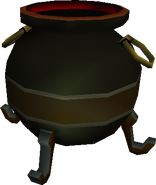 [view · edit · purge]Hades (ᾍδης, Háidēs) is the Greek god of the underworld, as well as the name of the underworld itself. Despite many modern portrayals, in ancient Greek religion and mythology, though respected and feared in equal measure, Hades was not represented as evil, only just and resolute. In Christianity, the same Greek name is either translated into English as hell or simply transliterated as "Hades" in the Bible. The Greek term is used to translate the Hebrew term Sheol (שאול) in the Septuagint and it also appears in the New Testament.