behind the big ocean rock)

Who dares disturb my sleep? Leave at once, or you will die.

Hades, originally introduced to the player as a Mysterious Voice, is a superboss and a secret synthesis shop in Final Fantasy IX. He is encountered in Memoria in the ocean room by walking right and examining the area behind the large rock and choosing not to leave when asked. There will be no "?" field icon to indicate him, but pressing

reveals him. Instead of the the normal boss music, "Hunter's Chance" plays during the fight.

Hades's existence is hinted at the start of the game in Mogster's tutorial Active Time Event about synthesis. Mogster mentions a "Legendary Synthesist" that can create the best items.

Hades's Judgment Sword attack saps a party member to a single HP. Hades uses both Freeze and Mustard Bomb. His Curse attack deals random damage and inflicts Confuse, Poison, Mini, Darkness, and Slow on all party members. When Hades powers up his sword he will count down to casting Doomsday, dealing heavy Shadow-elemental damage to the entire party while healing himself. He uses Curse after every odd-numbered countdown, and Doomsday after every even-numbered countdown.

If the party has defeated Ozma before encountering Hades, Hades will comment:

It is recommended to defeat Hades before he casts Doomsday. To avoid being devastated by Doomsday, the party can equip Shadow-nullifying/absorbing items, such as Egoist's Armlet, Pumice Piece, Ninja Gear or Demon's Mail.

Hades is classified as a demon-type enemy, but also as flying-type due to him hovering. Characters equipped with the Devil Killer or Bird Killer abilities will deal more damage with their normal attacks. Quina's LV4 Holy works on Hades.

I commend you for overcoming me. I shall reward you for your impressive feat. Bring 2 Pumice Pieces here, and I will synthesize them for you. The end product is something only I can create.

If the party defeats Hades he will provide a synthesis shop, enabling the party to synthesize a Pumice from two Pumice Pieces. This Add-on teaches Dagger the summon Ark. He can also synthesize other rare items, including Phoenix Pinions, the Robe of Lords, and Protect Rings.

Tin Armor, Steiner's best suit of armor, can be synthesized with an Ore and a Hammer (the reward for completing the Stellazzio sidequest), but if the player synthesizes the Tin Armor they miss out on an extra scene in the game's ending. Hades can also synthesize Beatrix's Save the Queen, but nobody can equip it as a weapon (however, it can be thrown by Amarant).

Hades's card is won off the Card Phantoms in Memoria.

Hades is never seen outside of his battle, even after the player defeats him. His synthesis shop can be accessed by talking to him in the same spot where the player fought him. This is similar to the final boss Necron, who likewise doesn't have a field model.

Hades was originally planned to be the final boss, but was changed to an optional boss. The concept artwork at right of the final battlefield shows the party fighting Hades instead of Necron. There are eyes on the face of his sword and on his throne. Blinking disembodied eyes are also seen in the final battle arena, showing the connection between Hades and the original final battle. Incidentally, eyes are also a feature of many Terran structures (e.g. Pandemonium). 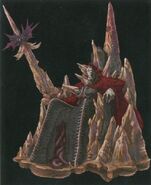 Hades comments on the party having defeated Ozma.

[view · edit · purge]Hades is the Greek god of the Underworld, as well as the name of the Underworld itself. Despite many modern portrayals, in Ancient Greek mythology, Hades was not represented as evil. Later Christians used the name as being synonymous with the Devil, which seems to be the inspiration for the forms that the monsters with this name take.