HP Critical (ひんし, Hinshi?), also known as Critical, Near Fatal, Anemic, Near Death, or Near KO, is a status effect that appears in several games in the series. The status does not actually do anything on its own, but is a trigger for a number of items, character abilities, Desperation Attacks, or Limit Breaks. Critical simply refers to a status of being low on Hit Points.

Normally, when in Critical, the characters assume a bent over or crippled position, and their HP is usually at a low percentage displayed in a yellow or red color. In other cases, the characters simply look exhausted.

The spell Tornado is the only way of achieving critical status without dropping the target's HP to 1/16 of their max HP.

Several spells and attacks cause this status effect:

The status was called Near Fatal in the versions prior to the Advance release.

The critical status decreases the attacker's hit rate on the affected by 25% apart from the game versions affected by the Evade bug.

Listed in the manual as both ANEMIC and CRITICAL, HP digits turn yellow when characters hit critical health at below 25% max health and the characters appear exhausted on the screen.

When a party member is in critical health or KO'd, the screen is tinted red. If the player finishes a normal encounter with critical health, the characters may comment on their poor performance. Some

Complete Materia activate when someone in the party is in critical health, such as

When Zack is in critical condition, the screen flashes and the text "critical" is displayed on the side of the screen in large letters.

Party members fall into critical health when their HP is 25% or less of their max HP. HP digits turn yellow when critical, and the characters appear exhausted. Being in a critical state raises Crisis Level, which increases the chances of being able to perform a Limit Break and stregnthens their effects.

If Rinoa is in the party, Angelo has a chance of performing Angelo Recover on a critical HP party member.

The status is called Near Death.

HP digits turn yellow at 50% and any SOS Auto-Abilities will be activated while in a critical state. The Daredevil Overdrive Mode also boosts the user's Overdrive gauge every time they get a turn while in critical condition. In the original Japanese version, the critical threshold is instead 25%.

Characters look more exhausted as their HP is lowered past 50%, until they are nearly doubled over past 25%. The post-battle comments highlight their tired state. Aeons will also slouch at 50% HP, including enemy aeons in all but the original Japanese version.

Characters fall into the Critical status when their HP falls below a third. They will appear tired and hunched over when in critical condition. Aeon enemies also use their Critical stances in the same condition. If the player finishes a battle in critical health, the party's comments reflect that.

There are numerous SOS Auto Abilities that act when users with the abilities are in Critical. The Cat Nip accessory uses the unique "SOS ????" auto-ability which allows characters in Critical status to inflict 9,999 damage for every attack, regardless of Attack power or enemy Defense. This can be well-utilized with the Trigger Happy and Black Sky commands. This method does not work in the International and HD Remaster versions, where Cat Nip adds Auto-Berserk and Auto-Slow.

A number of weapons and armors have "latent effects" that are triggered by HP. Some will be triggered at higher HP totals, but many are active only when the player is below 75%, 50%, or 25% of total HP. A near-fatal status may also be commonly referred to as in the red by English-speaking players as the player's HP will display in red text when below 25%.

The character is gravely injured but can still move and act normally. Remove by restoring HP.

When a character or enemy is in critical state, known as HP Critical, they will flash red. There are several passive abilities that trigger when the unit is in HP Critical status. Enemies have these innately, and the player can often observe their attack power and defense increase greatly while in low HP.

The player units can access several of these enhancements by purchasing augments in the License Board or by equipping accessories. The number of hits performed during a hit combo increases drastically when the user is below 6.25% of their max HP. Some enemies, when reaching critical state, gain a massive boost in their overall stats, some may even ready Growing Threat.

There are some enemies that only spawn if the player characters are on critical health. The player will get this status if their HP is at 15% or less left.

Units have no visible HP numbers, but their health bar turns dark red when they have only little HP left.

Whenever a character's HP falls below 30% of their maximum, they fall to an exhaustive posture. Their HP bar will turn red and flash white periodically, and the screen will glow red, continuing to do so if someone is KO'd.

Some synthesized abilities activate when the character's HP falls below ten percent of their maximum HP, such as Low HP: Power Surge, which increases the character's strength and magic. These abilities expire when their HP recovers and can reactivate many times over battle.

Critical party members have an exhausted posture and the screen gets a red hue. If a party member is KO'd the screen will keep glowing red. Certain passive abilities, either found innate in Paradigm Pack monsters or via equipment on Noel and Serah, activate when the unit falls in critical status, below 30% of their maximum HP.

Unique to Final Fantasy XV, when a party member's HP falls to 0, they don't get immediately knocked out but fall in a Danger state, and will be given a red meter that slowly decreases. During this time, companions can heal them via items, magic or the Rescue command. While in this state the party member cannot attack and moves slower. If the meter fully depletes, the party member will be KO'd. If the party leader is knocked out and not revived after a few seconds, the player receives a game over.

When the active unit is Near KO, the corners of the screen wash over in red, and both the HP gauge and its numerical value appear in red as well. At this point, the player should use a healing skill or pick up as many heart power-ups as possible. Healing is the innate skill of a Wizard; standing in a Wizard's regen field will recover the active unit's HP.

Heavy damage bringing body on the verge of death. Recover by restoring HP.

When a unit reaches Critical status, s/he will kneel down. A character is critical when they are at 1/5 or less of their max HP, rounded up. Some bosses flee the battle when brought to this state.

Attacks like the Templar's Vengeance are stronger in critical (since damage depends on Max HP to current HP difference). Being attacked by a critical attack can also lead to the trigger of some abilities, such as the Samurai's Bonecrusher, which deals the character's maximum HP as damage.

Characters in critical will kneel down. When equipped with the appropriate reaction abilities, the units may receive enhancements when they reach critical state, such as Last Berserk.

The Hunter ability Aim:Vitals may reduce a character's HP to 1.

HP Critical status is unchanged from Final Fantasy Tactics Advance. However, this status does help raise the power of Tenacity (when on the user) and Traumatize (when on the target).

When in critical health the battle theme changes in tone and the characters' HP numbers are displayed in yellow. The boss music also changes when the boss is in low health. The Beastmaster can capture enemies that are in critical health. The Paladin's Last Stand ability lets the character stay alive at 1 HP for a number of turns, and the Dark Fencer's ultimate ability lets the character unleash Darkside until they have only 1 HP remaining. The Shaman's ultimate ability reduces both the enemies' and the player party's HP to 1.

Near Death occurs when a player's HP falls below twenty-five percent and is shown by a red HP bar and a frequent high-pitched bell sound. The Achy ability increases this boundary. Certain other extra support abilities such as Magic Shield, Physical Shield, and Back to the Wall only activate when in near death status.

A character also enters Near Death if his opponent's Bravery is enough to defeat him with a single blow, even if that character has large HP. The character for the win will have his bravery colored purple.

Most characters will assume a hunched or kneel down posture when below approximately 10% of their maximum HP, also turning the HP gauge's numerical value a dark shade of pink. Below 25%, the bar graph value will also become bright red. 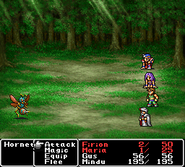 Firion and Maria in Critical in Final Fantasy II (PS).

Critical in Final Fantasy IV: The After Years.

Ursula in Critical in Final Fantasy IV: The Complete Collection.

The party in Critical in Final Fantasy V (PC).

Dagger and Eiko in Critical in Final Fantasy IX. 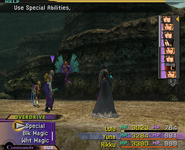 The party in Critical (50%) in Final Fantasy X. 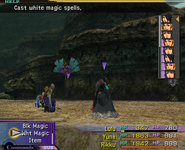 The party in Critical (25%) in Final Fantasy X. 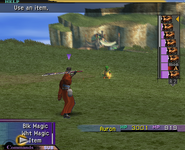 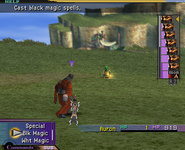 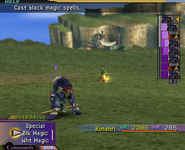 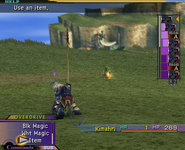 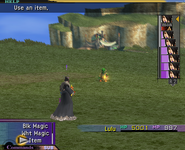 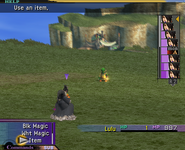 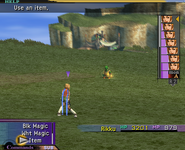 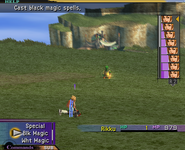 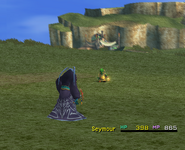 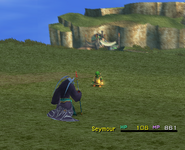 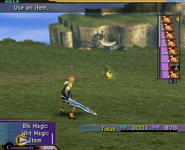 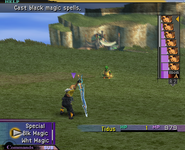 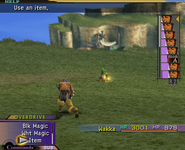 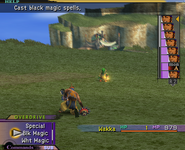 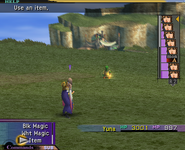 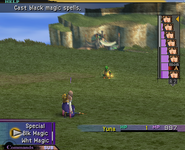 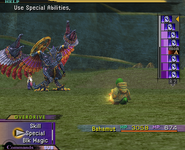 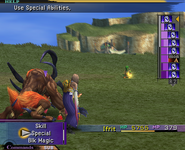 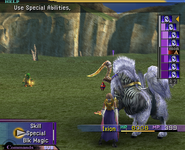 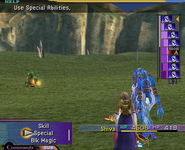 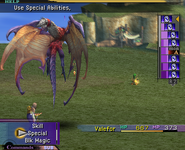 Paine and Yuna in Critical in Final Fantasy X-2. 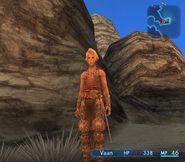 Luso in Critical in Final Fantasy Tactics A2: Grimoire of the Rift.