Gysahl, also known as Gisahl, is a village at the edge of the Floating Continent in Final Fantasy III. It is known for raising chocobos and has the same name as the famous Gysahl Greens that attract these useful beasts. This town also specializes in making Magic Keys. A Revification spring can be found.

A secret room exists beyond the rightmost wall in the first room of the inn. In the Famicom release, a girl could be found here who encouraged players to write a letter to Square and provided a mailing address. In the 3D release this was removed and the girl was replaced with an old man. Talking to him brings up a Bestiary that includes an Achievements record in the 3D versions only.

Note: Enemies are only encountered outside of the town.

The background music that plays in Gysahl is called "Gysahl Greens".

One of the original servers was named Gysahl. It was merged with the Wutai server into the Masamune server. 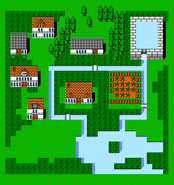 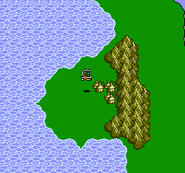 Gysahl on the World Map (NES).