None can match Guy's extraordinary physical strength; however, his imposing figure belies his gentle and somewhat naive nature. Guy also has the unusual ability to communicate to animals.

Guy, also known as Gus, is a playable character and one of Firion's two permanent allies in Final Fantasy II, the other being Maria.

Guy is a very muscular man with tanned skin, brown eyes, and short brown hair. He wears a spiked blue cap, a light green breastplate that exposes his midriff and has leather straps attached to a blue belt with a gold buckle, blue briefs, purple bracers and bands around his biceps, blue boots, and a purple cape. In his artwork for the Dawn of Souls version, Guy's eyes are always closed, he wears purple pants instead of briefs, and he has a scabbard with a large sword on his waist. His NES sprite is a modification of the Thief sprite from the original Final Fantasy with blue clothing and brown hair. Guy wears a simple green outfit in his PS/GBA sprites. His battle sprite matches Yoshitaka Amano's concept art in the PlayStation Portable version, minus the cap, but he is seen wearing it in his portrait.

Guy can talk to/understand beavers. He is a friend of the other party members, especially with Firion, but his past is mysterious, especially his ability to speak to animals and beasts.

Guy was raised by wolves in his early childhood and gained an understanding of animal languages. As time progressed, both Guy and Firion were adopted by Maria's family in Fynn. [1] During his time in Fynn, Guy would grow attached to both Firion and Leon, with the former often defending Guy from bullies who would mock his simple and childish dialect. [2] Despite his primitive dialect, he is an invaluable asset to the party thanks to his great physical strength.

Guy flees from Fynn alongside Firion, Maria, and Leon after it is attacked by the Palamecian Empire. After being attacked by Palamecian knights, he wakes up alongside Maria at Altair and then follows Firion on his fight against the empire with Maria, never splitting up. In one special episode, Guy speaks with a beaver at Snow Cave to learn the location of the Goddess's Bell.

After the Emperor's resurrection, Firion, Maria, Guy, and Leon are reunited, but are separated after the Hell Emperor is defeated at Pandaemonium, as Leon feels uneasy about his deeds.

While in the final version of Final Fantasy II Guy excels in strength, in the earliest drafts he was described as a cool-headed magician.[3]

Guy's starting equipment is an axe and leather armor. Out of the three starting characters, Guy has the most Strength and HP, suited for a Warrior, and with his high Stamina his HP will grow quicker than Firion's or Maria's. His magic stats are on par with Firion's but lower than Maria's, and he has the least Agility so he will likely take his turn last among the party.

If the player wants to give him magic, spells like Haste, Protect, and Shell are good as they are buffing spells unaffected by low Spirit or Intelligence, which Guy will likely have if the player focuses on his physical attributes.

His ultimate weapon in the Arcane Labyrinth is the Gigantaxe.

It is up to the player to decide what kind of warrior Guy becomes, due to how stat growth works, Guy's lower magical stats and agility can be easily made up with proper investment.

Guy has made appearances in the following games in the Final Fantasy series:

In Final Fantasy IX, there is a man named Guy in Lindblum, perhaps as an allusion to Final Fantasy II seeing as IX already has numerous such allusions.

Guy appears as one of the main characters in the game's first novel adaptation, Final Fantasy II Muma no Meikyū. The novel mentions Guy was abandoned by his family in the wild, and was found and raised by a beast named Mauza until the age of ten. Guy's ability is more important in the novel, where Ricard's omission means Guy acts as the translator between the Wyvern and the party. Since his lack of social skills make him a silent character, Guy takes a small role in the plot.

Guy's age is given as sixteen years old in the novel, but it is never mentioned within later releases of the game or extended guide materials. 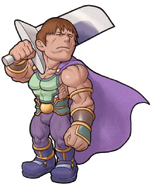 Alternate artwork of Guy for Dawn of Souls.

[view · edit · purge]Guy is name of Old French origin taken from the Germanic name Wido, which in turn was the short form of names that contained the element witu or "wood," such as Witold and Widukind. In English, it is also a colloquial word referring to a man.