Gustaberg is a region of southern Quon in Final Fantasy XI. The Republic of Bastok lies in the center of this rocky, arid region. While devoid of most forms of plant life, the area is abundant with various types of ore. It is this surplus of ore that has transformed Bastok into a mighty republic. During the Crystal War this region was incorporated into the Gustaberg Front.

This area is subject to Conquest. Due to its proximity, it's extremely rare for the Republic of Bastok to lose control of this region. 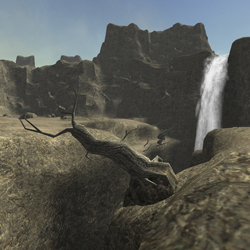 Situated to the north of Bastok, this valley is surrounded by steep mountains. Separated into east and west areas by towering cliffs, this rocky region remains desolate due to various mineral run-offs which contaminate the river water. However, the spectacular Drachenfall, located to the north, is considered to be one of the wonders of Vana'diel. The region's outpost is located in this zone.

There are two Cavernous Maws in this area. A frozen maw just outside the exit of Port Bastok connects to the time of the Crystal War twenty years in the past. The active maw along the northern cliffs leads to the blighted Grauberg of the alternate reality of Abyssea. This zone also contains one of the entrances to Movalpolos. 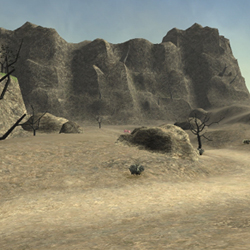 Spreading out to the south of Bastok is the rocky terrain of South Gustaberg. Plentiful with ore, hundreds of tunnels and mine shafts have been dug beneath the earth by Humes and Quadav alike. To the east, the Morhen Lighthouse can be found on the cliffs lining the Bastore Sea, its light guiding the way for the ferries and airships that traverse the area.

A Cavernous Maw connects South Gustaberg to the Altepa Desert in the alternate reality of Abyssea.

These mines were recently dug out of the large rock formation that lies in the Mines District of Bastok when a vein of Darksteel Ore was discovered within. Zeruhn has since become a reliable source of iron and a small supplier of zinc, silver, and darksteel, and because of its location within the walls of Bastok, Zeruhn Mines is safer for miners than the nearby Palborough Mines, which was recently retaken by the Quadav.

This dungeon is quite small and suitable for very low level adventurers. The mines connect to the Korroloka Tunnel leading to Zepwell Island.

Dangruf Wadi is a small gorge located near Mount Dangruf, an active volcano. Due to the extreme heat caused by the magma under the surface, numerous natural geysers can be found in this area. Some of these geysers are useful for transportation, operating like lifts for players. It is said that long ago, the Galka often would come to bathe in the hot springs here to relieve the aches and pains caused by the long hours they worked in the mines.

Dangruf Wadi is considered a dungeon, in spite of being outdoors. This means that players cannot enter on a chocobo. When casting Escape, players will be removed to South Gustaberg. A northern exit in this zone leads to the base of the Drachenfall in North Gustaberg.

Palborough Mines was once a Quadav settlement, nestled beneath the earth just outside North Gustaberg. That was until a vein of mithril was discovered. It was captured, forcibly, by the Republic of Bastok which then used these mines to gather most of the metals that they have today. They would still be mining there today, but the Quadav have since taken over the mines and use them for their own resources.

The Waughroon Shrine is a place of worship for the Quadav built deep within the heart of the Palborough Mines. There are no enemy creatures in the zone, normally. This is one of the many Burning Circles where players can choose to take on special fights against predetermined enemies for potentially great rewards.

Korroloka Tunnel is a cave system located deep beneath the sea floor. It was originally used by the Galka to flee from their native lands to the Quon Continent when they were driven out by the Antica. The interior of the cave is formed from a terrestrial coral. In spite of its beauty, though, the Galka think of it as a place of tragedy and death, where the coral thrived on the blood of fallen comrades.

Korroloka still functions as a land-bridge beneath the sea between Bastok and the Kuzotz region. All players wishing to use Teleport-Altep will have to travel through this cave system at least once to get to the Altepa Crystal. Since it is underground, it cannot be accessed by players riding a chocobo; they must walk the way through while avoiding the creatures living in this tunnel. The spell Escape will take players to the Zeruhn Mines.

This zone requires Rise of the Zilart expansion to access.

Gustaberg appears as the FMS for its eponymous theme.

Gustaberg appears in the FMS for its eponymous theme.

This section about a location in Final Fantasy Record Keeper is empty or needs to be expanded. You can help the Final Fantasy Wiki by expanding it.
Final Fantasy XI setting
Community content is available under CC-BY-SA unless otherwise noted.
Advertisement