Use a gun to fire on enemies from afar.

The Gunner is a dressphere in Final Fantasy X-2 and is Yuna's default dressphere. The Gunner focuses on high accuracy and agility and uses attacks requiring no charge time. In Final Fantasy X: Eternal Calm, it's revealed that Yuna's Gunner outfit was a gift from Rikku. 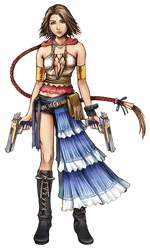 The Gunner dons a sash on the hip and knee-high boots.

Yuna wears a white top with pink lace trim at the bottom featuring the insignia of the Zanarkand Abes in the middle and a pink hood. She wears denim shorts and a brown belt with brown, fringed pouch. She has an ankle-length cornflower blue and white sash on her left hip. She has yellow arm bands on her upper arms and and a black band on her left wrist. She wears knee-high black boots with white laces.

Rikku wears a yellow and purple top and purple hot pants. She wears a knee-length yellow and white sash with black fringe bottom on her left hip. She wears a black band on her left wrist as well as a purple and brown headband. She wears knee-high black boots and thigh-high purple socks. She has two braided bracelets on her right wrist; one purple, the other yellow.

Paine wears a red and black top with a high white collar and a red choker necklace. Her red and white striped sleeves are attached to her upper arms and black fingerless gloves. She has black garter pants and black knee-high high-heeled boots. She wears a thigh-length red and white sash with yellow fringe bottom on her left hip.

Gunners wield dual guns, with the second used during Trigger Happy. Yuna wields the Tiny Bee pistols. Rikku's gun is smaller than Yuna's, while Paine's is the largest of the three.

Yuna's victory pose is to imitate shooting her gun and blow out smoke at the end of the barrel. Rikku spins around and pumps her arm while Paine flicks her hair.

Mastering Gunner requires 800 Ability Points. There is no accessory or Garment Grid that allows the player to use Gunplay outside of the Gunner dressphere.

In the original version, Gunner's Trigger Happy ability is known for its power when paired with the Cat Nip accessory. With the Cat Nip, each shot of Trigger Happy can deal 9,999 damage if the user is in HP Critical status. Due to this, the Trigger Happy ability has the potential to be the strongest attack. This trick no longer works in the International or HD Remaster versions, as Cat Nip now includes Auto-Slow and Auto-Berserk. Yet, Gunner remains one of the best dresspheres, as its multi-hit abilities work well with any ability that modifies attacks. The player can thus pair it with Mortal Shock (adds Death to attacks), with a Stone Shock (adds Petrify) and System Shock (adds Stop).

When equipped to captured creatures, the Gunner dressphere grants them Precision Strike (a high-accuracy physical attack) if they have the Attack command in their command list and Darkproof.

The Gunner dressphere is equipped on Yuna by default if the player selects her at the beginning of the game. Additional copies can be found on the ground inside the tower or bought in shops. It increases Defense by 1 point and Accuracy by 2 points per each level. It has the lowest HP of all available dresspheres, and thus best used by advanced players.

Its regular attack range is three tiles ahead of the character.

Yuna's Gunner is available as a downloadable costume. She retains her role of summoning aeons with her staff as a weapon.

Yuna's Gunner outfit appears as her alternate costume. Like Dissidia 012, she retains her gameplay role as a summoner.

Yuna's second version dons the Gunner dressphere, called Yuna #2. It is available from the start by transferring save data from the second demo. If the player did not select her among their party of four, or download the demo, she can later be unlocked by collecting Indigo Crystal Shards. Yuna #2 is Spell oriented and her Limit, Trigger Happy, deals damage in proportion to her Strength, Agility and Luck. 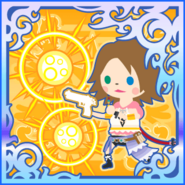 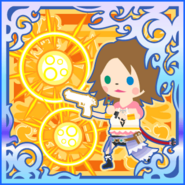 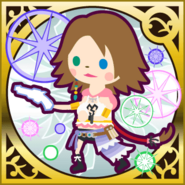 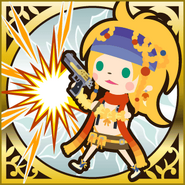 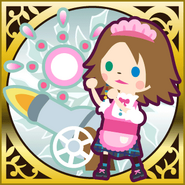 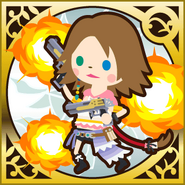 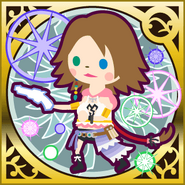 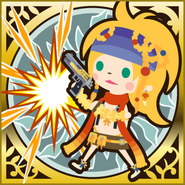 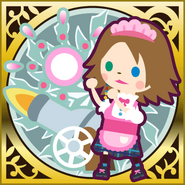 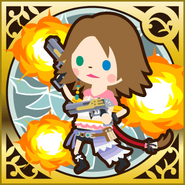 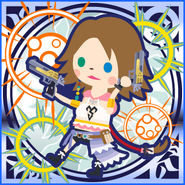 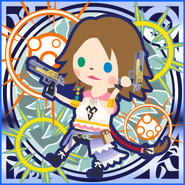 A famed heroine known throughout Spira, Yuna defeated Sin without using the Final Aeon and became High Summoner. Rikku later asked her to join the Gullwings as a sphere hunter.

Yuna's Gunner appearance is available as part of the Wardrobe Record system and is called "Gunner Garb". This was first obtained during the Challenge Event Eternal Calm, and has since appeared frequently in events involving the Spira saga.

As Yuna's default dressphere, she dons the Gunner in many of her cards. The cards are water-elemental.

Yuna appears in Kingdom Hearts II wearing her Gunner dressphere. The Gullwings are diminutive in stature and depicted as pixies. Yuna's outfit is slightly modified outfit with a skirt and in place of the Zanarkand Abes logo is a hidden Mickey symbol.

Yuna appears in the fanmade CG movie in her gunner default outfit.

Yuna is a playable character in Dragon Quest & Final Fantasy in Itadaki Street Special in a chibi version of her Gunner appearance, alongside Rikku and Paine. 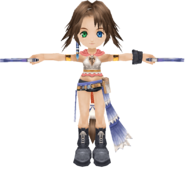 Rikku's Gunner model was used as a placeholder in the making of Final Fantasy XIII.

Yuna as a Gunner.

Rikku as a Gunner.

Paine as a Gunner. 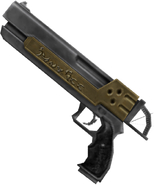 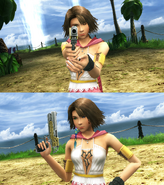 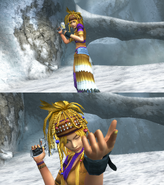 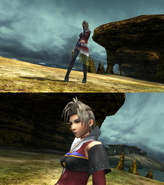