The Gunner (ガンナー, Gannā?) is a job class in the Final Fantasy series that specializes in using guns are their weapon of choice. Like the recurring Ranger job, Gunners opt to fight their enemies from a distance.

Two notable variants of the Gunner exist within the series—the tool oriented Machinist, and the moogle-exclusive job, the Fusilier (sometimes translated as Gunner in previous entries).

While guns first appeared in the series in Final Fantasy VII, the Gunner did not make a formal appearance as a job until Final Fantasy X-2, as the default job for Yuna. Gunners specialize in hitting opponents from afar, usually disabling them, though Final Fantasy X-2 itself did not have a row system.

Gunners have high Accuracy, rarely missing their targets. The downside is that Gunners do not deal as much damage as other jobs, since guns do not usually rely much on the Gunner's actual Attack stats. However, they deal as much damage in the back row as they do in the front. Gunners somewhat parallel the Rangers seen in earlier entries of the series.

Barret wields a machinegun in battle that is mounted to his arm. While the Materia system allows players to make Barret serve any combat role, his Limit Breaks involve him unleashing a barrage of ranged attacks from his firearms onto enemies. In addition, early development artwork

has Barret assigned with the Gunner job, which would become Barret's job class in later spin-offs.

While the character Vincent Valentine does wield one-handed guns in combat, his Limit Breaks involve him fighting with melee weapons.

Both Barret and Vincent ignore the row mechanic when equipped with guns (Barret has a couple melee weapons, but all of Vincent's weapons are guns), able to hit enemies that would be out of reach for melee weapons, and dealing the same damage from the back row as from the front row.

The Gunner dressphere is available from the beginning, and is Yuna's default outfit. It uses various attacks that, while not extremely powerful, are quick and versatile. The game has no row mechanic and so the Gunner's ranged property does not give an advantage in battle. However, the gunner mechanics are also used for the Gunner's Gauntlet minigame in Besaid.

This section about a job class in Final Fantasy Brave Exvius is empty or needs to be expanded. You can help the Final Fantasy Wiki by expanding it.

The Gunner appears as the unique job of Crace, Frederika, Rairyuu. The Gunner job specializes in debuffing enemies with several status ailments and granting the user abilities to improve their chances of dealing critical blows.

Barret has a unique version of Gunner known as "Gunner (FFVIIR)", which has access to several of his abilities from the Final Fantasy VII Remake.

Several titles have featured characters who have served as references or were inspired by the Gunner job.

While characters such as Lightning and Sazh Katzroy from the Final Fantasy XIII series of games wield guns in some fashion, their gameplay styles differ from the Gunner.

Cater and King wield guns as a weapon. Cater uses a magicite gun that can shoot magic or elemental bullets, and the strength of the volley depends on the charge level. King uses dual-pistols that get stronger the closer he is to an enemy.

Prompto equips firearms as his primary weapon and uses them in his techniques and in link-strikes with Noctis. When character-swapped to and during "Final Fantasy XV: Episode Prompto", the player can manually aim and his weaponry expend ammo. In the main game, the ammo replenishes automatically after a while and between battles, but in "Episode Prompto" the player needs to stock up on their supplies from the environment (new guns are plentiful, however). 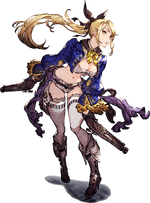 The Dual Gunner (ダブルガンナー, Daburu Gannā?, lit. Double Gunner) appears as the unique job of Luartha and Lu'cia in War of the Visions: Final Fantasy Brave Exvius. It is a ranged physical job that uses missile-type attacks in combat. Unlike the default Gunner job, Dual Gunners specialize in using dual pistols with their abilities involving dealing quick and multi-hitting attacks at the cost of sacrificing damage potency.

The Gunner appeared as a silver card for players to obtain.

The Gunner appeared exclusively as an asterisk in Bravely Second: Praying Brage. Similar to its appearance in Final Fantasy X-2, the Gunner utilizes dual pistols in combat. 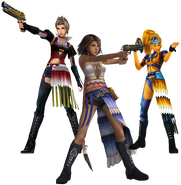