Have ye heard? Take a broken spear 'n' some mystletainn, an' wrap 'em in a Ketu board, right? Ye ken wha' happens? They burst inta fleem! Hard te believe, eh? Bot it's true! Why, tha's the very method fer makin' one o' them gungnir spears, so it is! Course, ye cannae jus' burn the wee thingies. Ye have te wait 'til she flares up on her oon! Tha's all important, tha' is. One look at the fruits o' ye labors an' ye'll agree 'twas well worth the bother.

The Gungnir (グングニル, Gunguniru?) is a weapon that appears in several games of the Final Fantasy series, though sometimes only as the summon Odin's spear and not a weapon that characters can equip and use.

A lance reportedly held by the god of war.

The Gungnir is a special weapon for Gordon that can be obtained in the Arcane Sanctuary in the PSP version, and provides 90 Attack as well as +50 Strength and Agility.

Gungnir is a rare steal and rare drop from Odin in the 3D remakes. It has an Attack of 140 and is among the best weapons. The Dragoon and Onion Knight can wield it, and it provides a bonus of 10 to Strength and Agility.

Legendary spear said to have been a favorite of the gods.

Gungnir (Hero's Spear in the Easy Type version) boasts an Attack of 99 and Accuracy of 30, as well as granting +15 to Stamina. Kain is equipped with it when he joins the party after the Battle of the Giant of Babil. This weapon is metallic.

In the 3D versions, it has an attack power of 99 with an accuracy of 90 with the same properties as the 2D versions. Kain can equip this spear.

The Gungnir is a powerful spear for Kain, and provides 99 Attack, 30% Accuracy, and +10 Stamina. It is found in a chest in the Subterrane after defeating Barbariccia.

Legendary lance of the gods.

The Gungnir is Mog's exclusive weapon acquired in the Dragons' Den by defeating the Neslug (only in the Advance and 2014 versions). Another way to get one is to bet the Longinus in the Dragon's Neck Coliseum. Gungnir has an attack power of 240, +7 Stamina and Magic, and enables the Runic command, but does not grant Jump bonuses.

Any of Kimahri's spears may become the Gungnir when Break Damage Limit is the weapon's dominant ability.

The Gungnir is the Relic Weapon polearm for the Dragoon job, available to level 75+ Dragoons after completing a lengthy and expensive quest (usually taking tens of millions of gil). Through subsequent quests, its stats can be increased to Item Level 119.

While it is one of the best polearms for Dragoon, it is weaker than other two-handed melee job Relic Weapons. This is due primarily to the hidden effect created by using its unique Weaponskill, Gierskogul, which causes its user to gain a potent Shock Spikes effect.

This weapon is not the spear used by the form of Odin faced in the difficult Einherjar endgame instanced event, as both the event and Odin himself were introduced three years after the Relic Weapons were created. Though what he clearly wields is a much larger, more impressive polearm than the Relic Weapon, Odin refers to it in-combat as his "...obsidian blade..." before unleashing his trademark Zantetsuken annihilation move unto players, referring to the sword of the same name. A high-level version of the avatar fight drops this weapon, which is named Geirrothr.

The Gungnir is one of the stronger spears. Spears are among the faster weapons, second only to daggers and ninja swords.

In the original version Gungnir can be bought from Lohen's shop in Dalmasca Westersand after the events of Giruvegan for 17,000 gil, made in the bazaar by selling Mystletainn x2, Ketu Board x2 and Broken Spear x2, and costs 15,300 gil. It can drop from Bune (rare) in the Pharos and Subterra. It can also be obtained via the Hunt Club sidequest. Gungnir can be equipped by characters who have obtained the Spears 5 license on the License Board for 40 LP. It does Fire-elemental damage and has Attack power of 84.

In the Zodiac versions, it now provides 95 Attack, 8 Evade, 28 Ct, 4% combo rate, is Fire-elemental, and has a 10% chance of causing Disable on a target and requires the Spears 5 license for 40 LP. It can be found as a treasure in the Pharos - First Ascent (Wellspring Ravel - 3rd Flight), dropped by Bune (3% chance), or from the bazaar for 9,025 gil by selling Ketu Board x2, Broken Spear x2, and Mystletainn x2. Gungnir can be wielded by Uhlan.

Forked lance that dances with flame.

Llyud's strongest weapon, the Gungnir, is a Fire-elemental weapon acquired after completing Mission 79: Wings of Midnight. It provides +100 Attack, +50 Magick, and +40 Speed, as well as giving the additional effect of Spread Damage. It uses a generic spear sprite during battle.

Touched by the hand of the god of war himself, this once enchanted weapon cuts down foes with merciless vengeance.

The Gungnir is a second tier spear for Fang acquired after using Scarletite on a maxed out Gae Bolg. It has an improved Counter rate, and a Positive Effect synthesized ability that extends the duration of buffs. Gungnir starts at level 17, and maxes out at level 41 with maximum Attack and Magic powers of 230 and 220 respectively. At max level it dismantle into Gargantuan Claw (x12), Thickened Hide (x3), and a Gae Bolg.

A spear with the power to pierce anything.

Gungnir is the second strongest spear exclusive to The War of the Lions remake, surpassed by the Javelin II, obtained via Rendezvous. It has an Attack of 29 and Weapon Defense of 15%, and is Lightning-elemental.

Gungnir has a spear icon before its name. It can be found in Nasty Dungeon or as a rare drop after defeating Odin. It has 30 uses, it also increases a Robot's HP by 144 and increases their Str by 32. The damage formula for Gungnir is 1050 points of damage + 15 x(Str - 70) if Str > 70. The spear is Long Range, attacks one group, and never misses.

Gungnir has a spear icon before its name. It has an attack power of 160 and can be bought for 18000 G at Cirrus in Pureland. Borgin is equipped with a Gungnir, and like all Guest characters, it cannot be unequipped.

Gungnir is one of the greatest spears and can only be equipped by the Lilty race. It can be forged for 5,000 gil with the Legendary Weapon Scroll, Alloy, Orichalcum, and an Ancient Potion. Its Focus Attack is Cross Slash.

Although not a usable weapon, Gungnir makes an appearance as the weapon used by Sir Latov when he is possessed by the Lich.

A sacred weapon with a raven spearhead. Used in the battle of the gods.

The Gungnir is the second strongest spear in terms of attack, and can be used by all races. It provides 133 attack at level 1 and 180 attack at level 30, gives +25 to Stun, has one empty slot, and comes with the ability Fast Charge 1. It can be created for 1,620 gil by using an Adamantite and Orichalcum x3 (Hard or Very Hard mode). When turned into a jewel, a level 3-9 Gungnir makes a Charjade, level 10-19 makes a Strength Stone 3, and level 20-30 makes an Emerald.

Gungnir appears as one of the stronger spears and has an attack of 21. It can be bought on the 40F of the Moonsand Ruins for 65,000 gil.

The Gungnir is the strongest spear that increases Attack by 68, decreases Defense by 1, and increases Crash Bravery damage by 50%. It can be acquired by inputting the password SF5AUS5WUJ39Y in the Friend Card menu and battling the FuSoYa card. It can also be made by synthesizing the Behemoth Horn with Holy Lance.

The Gungnir is one of the three strongest spears, sharing its stats with the Lufenian Lance and Rhongomiant, the only difference being their associated abilities. The Gungnir is a level 100 spear with 69 Attack, but it decreases HP by 328 and DEF by 1. It also increases Wall Rush BRV Damage inflicted on the opponent by 50%. It can be obtained from the shop by trading Holy Lance, Gae Bolg, Shinryu Claw, and 202,640 gil.

Lightning bears two exclusivel level 100 weapons, one of which, the Odin Blade, is named (グングニルブレード, Gunguniru Burēdo?, lit. Gungnir Blade) after the Gungnir, reflecting Lightning's other level 100 exclusive weapon being Odin's Zantetsuken. The Odin Blade has 68 atttack and provides the abilities Back to the Wall and Free Air Dash Boost. It can be obtained by trading a Barrage Blade, Survival Knife, Flash's Hope x5, and 182,800 gil.

A lance that promises its owner victory. Once owned by a war god, the gungnir's might lives up to its reputation. According to legend, this lance would penetrate any target it was thrown at, and eventually make its own way back to its master. Scholars remain speculative about its supposed divine origins, but there is no doubt that the gungnir has always brought peace over the course of history.

Gungnir is a Spear, obtained as Kain's Trust Master. It provides 90 ATK.

Gungnir is a spear that can be equipped by Santiago.

A throwing spear from northern mythology that the god of death and war is said to have used to herald the outbreak of war and the death of enemies. It has the almost mystical power of always hitting its target and then returning to its thrower's hand.

In Bravely Default, Gungnir is a spear that provides 45 P.ATK, 90 Aim, and 2 Critical. It can be found in Dimension's Hasp (B9).

In Bravely Second: End Layer, Gungnir is a spear that provides 43 P.ATK, 90 Aim, and deals 50% more damage to undead. It can be found in Via Celestio. 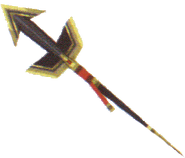 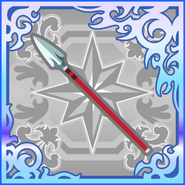 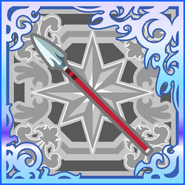 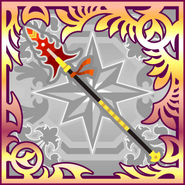 [view · edit · purge]In Norse mythology, Gungnir is a javelin forged and crafted by dwarves, known as the Sons of Ivaldi, on Loki's request as part of his apology for cutting off the hair of Sif. It was given to Odin and had the uncanny ability of always hitting the target it was thrown at.