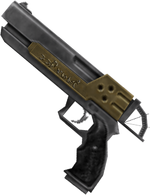 Guns (銃, Juu?), also called fire arms and handguns, are a recurring weapon type in the Final Fantasy series. They are ranged weapons which propel bullets toward foes. In some games, the damage they deal is not based on the wielder's Strength, but on the gun's attack power. Guns didn't appear until the PlayStation era games, and are usually equipped by Gunners or Machinists. In some of the later games in the series, guns are named after various stars.

Valkus primarily uses guns in battle. He wields a pistol and later a pair of machine guns.

Guns make their first appearance. The gun-arm, the weapons of Barret, and handguns, shotguns, and rifles, used by Vincent, are the ones available to the party. However, some of Barret's gun-arms are melee weapons rather than firearms, and may be more comparable to a variation of Knuckles.

Soldiers from the Shinra Army use machine guns. Other guns include the Mako-gun, used by Palmer; Rufus's shotgun; and Dyne's gun-arm, called a Needle Gun.

As Vincent Valentine is the only playable character, the whole arsenal consists of long-range, customizable guns. The gun turret is different from the firearms Vincent carry, the gun turret is a weapon with unlimited ammunition. However, being immobile can make the player an easy target. Shalua Rui, a new character, also uses guns.

Vincent and Barret make an appearance along with their default weapons. Loz and Yazoo make an addition to the list with the Velvet Nightmare.

Barret is the ranged party member who mainly equips gun-arms for weapons. He can unlock various abilities for them and use his limit breaks with them.

Irvine's weapon of choice is a shotgun (although referred to as "rifle" in Weapons Monthly magazines), and with it, he can use his Shot Limit Break. Laguna also uses a machine gun in battle.

Many Al Bhed use Machina rifles. Some Warrior Monks also use them, along with flamethrowers. No party members equip guns.

The Gunner dressphere uses a handgun called the Tiny Bee. Another dressphere, Gun Mage, uses a gun with a large open ring in place of a barrel that allows its user to learn and use the abilities of some fiends. The Alchemist dressphere also uses a burst firing rifle.

Logos uses a pair of long-barreled revolvers in battle. Nooj, Gippal, and Baralai wield machina handguns in some cutscenes, but only Nooj uses it as his main weapon, while Baralai uses it only during his Drill Shot attack. Gippal uses a machina hand-cannon as his main weapon, even using it when engaging Vegnagun before the final battle.

Guns are one of the two major types of marksman weapons (the other being crossbows). They have a long delay but high firepower, and while several jobs can use them, they are primarily used by Rangers and Corsairs. A subtype called the "Hexagun" is used exclusively by Corsairs.

Guns can be equipped by any character who has acquired the necessary license, though Balthier joins the party with one equipped. They are the slowest weapons, but have perfect accuracy and ignore defense, however, some enemies have a trait which will reduce the damage drastically.

Guns, like all ranged weapons, are incapable of multiple hits, but can deal critical damage from time to time. The guns' names are shared with the names of various stars.

In the Zodiac versions, the Machinist has access to all guns, but the Shikari can also access a few with Espers.

Due to the weight put exclusively on the combined Attack Power of the gun and ammo, a character with low Strength stat or low level or both can benefit from using it. Guns will almost never hit for around 9,999 points of damage as there are no guns and ammo to increase the Attack Power to 100 points. A character equipped with the strongest gun and ammo (Folmalhaut with Dark or Windslicer Shot (original version); Aldebaran Y with Dark or Windslicer Shot (Zodiac versions)) can deal up to 3,690 (6201 (Zodiac versions)) points of damage. Additionally, attacking under Bravery raises the damage output as well increasing it to up to 4,797 (8061 (Zodiac versions)) points of damage.

Balthier uses guns as his weapon of choice. The guns are named after stars.

Sazh uses two pistols, which can turn into a scout rifle, a much faster variant of a sniper rifle. Lightning uses a gunblade, similar to Squall Leonhart's Revolver, but unlike in Final Fantasy VIII, it can be used as a pistol of sorts. Her opponents and some of her allies, like Team NORA, also use guns. Like in Final Fantasy XII, the guns have star-based names.

Guns are used primarily by

Machinists. While machinists are the only player characters who can use guns, several NPCs who do not identify as machinists use them as well. Most notable is Merlwyb Bloefhiswyn, who dual-wields the unique pistols Annihilator and Death Penalty, a feat player characters cannot replicate. A

Musketeer class was planned in the early stages of the game, whom these gun-wielding NPCs were meant to be members of, but the class never made it past alpha.

Firearms are weapons mainly used by the Niflheim Empire. Prompto uses firearms as his Primary Arm, primarily handguns and shotguns. When character-swapping to Prompto, the player can swap between his basic handgun, sub-machine gun and a bazooka (as well throw a grenade). In Final Fantasy XV: Episode Prompto, the player can also use a sniper rifle.

Noctis can equip all firearms and has a firearm unique to him: the Cerberus, which can both be manually aimed and zoomed, intended for breaking off enemy appendages and for head-shotting imperial units. Firearms never trigger link-strikes when wielded by Noctis, but are the only weapons that can be used while in cover. When used by Noctis, he will fire eight bullets before needing to reload, but the reload animation can be skipped by switching weapons right after Noctis has fired his eight bullets, or by being in cover, where Noctis will skip the reload animation to put the gun away to return to his cover position. Ranged attacks deal less damage the further away the target is, and guns are not particularly powerful, but the ability to take cover in safe places is sometimes useful.

The player can use mounted machine guns at imperial bases and the Insomnia blockade. This mechanic was also used for minigames in the Moogle Chocobo Carnival and Final Fantasy XV: Assassin's Festival, and for the Immortalis battle in Episode Prompto.

Imperial soldiers use assault rifles and some use sniper rifles, and many magitek troopers have guns hidden in their wrists. Promto's handgun appears in cut scenes in Chapter 11.

Guns can be equipped by Chemists, Orators, Onion Knights, the special jobs Machinist and Sky Pirate, and any character that has equipped the ability Equip Guns.

Guns are exclusive to moogle Gunners, and can be bought at a cheaper price at Baguba Port. It has the longest range.

Guns lost their exclusivity and now can be used by both the moogle Fusiliers and the Agent (exclusive to Al-Cid).

Layle uses an assault rifle against a swarm of monster while falling through the air in the intro. This is the only weapon he uses, other than a sword used in a boss fight. However, it is not directly equipped, and is instead thrown during the fight.

Guns appears as one type of weapons. A gun icon can be found within the English version's game coding, but is left unused for the actual gun weapons.

Guns appears as one type of weapons. They cause damage along a set range, not referencing Strength or Agility as part of their calculations. Nevertheless, most guns will increase a Robot's Strength or Agility. The Psi gun gives a robot no bonus stats: internally, it is "Magic +0".

Final Fantasy: The Spirits Within[]

Set in a post-Apocalyptic Earth of 2065, guns are the only type of weapon featured. The guns in the film fire energy-based projectiles and are powered by organic power cells, utilizing the energy that exists in all organic life on Earth, which is of an opposing frequency to that of the alien Phantoms.