Oh, in case you're wondering, the Gullwings are sphere hunters, and sphere hunters are, well... This! We fly all over Spira. I'm really enjoying myself.

The Gullwings, (written Gull Wings during blitzball), and known as the Seagulls (カモメ団, Kamome Dan?) in the Japanese release, is a neutral sphere hunting group that Yuna, Rikku, and Paine belong to in Final Fantasy X-2.

As implied by the term "sphere hunter", their main purpose is to hunt and obtain spheres in order to assist in the uncovering of Spira's history. The group ends up providing a variety of additional services throughout the game, mostly because of Yuna's innate compulsion to help people in need and her inability to say "no." The group travels around Spira by use of their airship, the Celsius.

The Gullwings were originally an 'all-Al Bhed' group founded by Rikku, Brother, and his old friend Buddy. They were shortly joined by Shinra, Paine, and lastly Yuna.

In order to recover the airship Celsius, Brother and Buddy traveled to Spira's cold northern regions. At first their attempt to find an airship appeared to have failed. Suddenly spotting a single gull in the sky, they, on a whim, decided to follow it. The gull led them to the airship, and so, based on this event, the group was named the Gullwings, after the bird.

Two years had passed since Yuna defeated Sin. Back on Besaid Island, her quiet life was shattered when she received a message from Rikku, who had a gift from Kimahri—a sphere he found on Mt. Gagazet showing a man with a striking likeness to Tidus, her lost love.

Yuna joins the Gullwings in order to find out more about the sphere and whether or not it means Tidus is still alive. Prior to the game beginning, Yuna's Garment Grid was taken from her by a group called the Leblanc Syndicate led by the sphere hunter Leblanc.

Using her Garment Grid Leblanc impersonates Yuna, taking on her identity and while wearing the Songstress dressphere uses her fame to gain money by organizing a concert at Luca. The Gullwings come up with a plan involving Rikku and Paine sneaking into the concert in hopes of getting Yuna's grid back. Yuna has to be left behind wearing the Mascot dressphere as a disguise.

After a confrontation in Luca Harbor, the Gullwings defeat Leblanc and her goons and retrieve the Garment Grid before returning to the airship. Following from that, the group sets out to search for spheres.

The trio heads to Kilika Port, where they obtain a sphere detailing events the Gullwings wish they hadn't seen, of a dangerous weapon known as Vegnagun. They see the man who looks like Tidus in the sphere who talks about a songstress called Lenne. The group decides to give up the sphere to either the Youth League or New Yevon.

Yuna, Rikku and Paine, together with Leblanc, Logos, and Ormi enter Bevelle, and manage to get to the old Chamber of the Fayth, into the underground section where the sphere was found. The group fights Baralai, the leader of New Yevon. They defeat him and enter the Vegnagun chamber, only to find Vegnagun gone and a twisted, Dark Aeon version of Bahamut in its place.

When they enter the Chamber of the Fayth and shortly after defeating him, Ixion explodes as he had merged with the Machine Faction's machina. The effect knocks Yuna into the Farplane, where she meets the man bearing resemblance to Tidus. The man turns out to be a look-a-like named Shuyin, an angry unsent hellbent on seeking revenge for his love, Lenne's, death. Yuna is able to see the real Tidus when she hears his whistle in the Farplane and upon seeing him, she tries to catch up to him, only to find herself back in Spira.

In an effort to quell the rising tension in Spira, Yuna holds a concert on the Thunder Plains, where she wears the Songstress dressphere. As part of the concert, Shinra creates a sphere-screen so even the spectators further back the crowd can see the performance. The Songstress dressphere has an effect on the screen, and the people see images of Lenne and Shuyin in front of Vegnagun just before their deaths.

After the concert, the group travels into the depths of the Farplane where they encounter Vegnagun. They defeat it and are attacked by Shuyin. They attempt to trick him into thinking Yuna is Lenne, but the plan fails and an enraged Shuyin forces Yuna, Rikku and Paine into battle. They defeat him, and Lenne leaves Yuna's dressphere, encouraging Shuyin to return to the Farplane with her.

While leaving the Farplane, Yuna meets the fayth of Bahamut. He asks if she wants another moment with 'him'. If Yuna agrees the fayth find Tidus's pyreflies and restore him to life with Tidus emerging on Besaid Island and he and Yuna have an emotional reunion.

After landing in Besaid the Celsius malfunctions and is unable to fly and even Shinra is stumped on how to repair it. A man named Briar points Shinra out as a "Bedore" and tries to attack him, but Paine and the other Gullwings subdue him and tie him up at the Besaid Temple. Shinra is curious and asks Brier what a Bedore is and learns it is the ancient name for Al Bhed. Briar tricks Shinra into releasing him by promising to fix the Celsius, but as Shinra unties him Brier knocks him down and escapes.

Three months after the events of Final Fantasy X-2, the former members of the Gullwings have all gone their separate ways: with Yuna living with Tidus in Besaid, Rikku working mission after mission, and Paine wandering Spira by herself. Each member of the party receives a letter that calls them back to explore the Iutycyr Tower. As the trio explore the ruins they converse with each other over what they'd been doing since they had separated and why they hadn't stayed in contact.

The conversation escalates as Rikku expresses her jealousy towards Yuna, who had reached her goal in life and settled down. The bickering between the pair causes Paine to raise her voice. Paine reveals she was the one who sent out the letters; citing it was her wish to not lose the friendship they once shared, having learned from both her previous friendship with Nooj, Gippal and Baralai, and from her own lonely travels.

The trio eventually reach the top of the tower, where they find a broken machina and not much else. Due to their conversations they realize that the machina is a bit like their group: broken and separated. As they vow to be more than just strangers who had met by chance, becoming friends once again, the machina begins to work, and their adventures continue...

Due to babysitting Wakka and Lulu's baby, Vidina, the Besaid Aurochs allow the Gullwings to take their place in this year's blitzball tournament. Blitzball is available in Luca during Chapter 5. The player can elect to play the game as soon after landing, or drop in at the booth at Luca Stadium Entrance any time. The original team consists of Yuna, Rikku, Paine, Shinra, Brother, Buddy, Biggs and Wedge – however, new players can be signed on and rotated with the current ones.

The game's soundtrack includes numerous songs named after, or devoted towards, the Gullwings group:

The "Yuna" Zippo lighter represents the Gullwings with the wing of a seagull embossed on the lighter and wings on the silver chain. The chain is made of .925 silver, and the Zippo of polished steel. The Zippo is limited to 3,000 pieces and its original retail price was 15,000 yen. 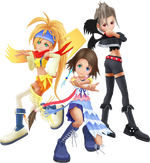 Yuna, Rikku, and Paine make an appearance in Kingdom Hearts II in the form of a pixie trio. Calling themselves "treasure fanatics", the three were mercenaries spying on Leon for Maleficent, though after being left behind by Maleficent and some trickery from Donald involving promised treasure, they join with Leon and help defend Radiant Garden against the army of Heartless.

Later, the Gullwings discover Donald's lie but feel sympathetic to Sora's cause. Instead of taking his items they give him the keychain "Gullwing".

The Gullwings (Yuna, Paine, Rikku) are all playable characters in the special edition of the Monopoly-like video game available only in Japan.