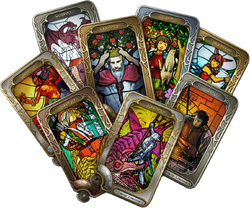 Guildleves are small, rectangular plates made of stained crystal set into a frame of precious metal in Final Fantasy XIV. Each depicts a virtuous deed of one of Eorzea's patron saints, also known as "guardians". When issuing tasks or quests, guilds often provide adventurers with these plates, allowing their bearers "leave" to take whatever steps necessary to complete the jobs, including entry into normally restricted areas, hunting or harvesting on private lands, the confiscation of goods, even negotiations with those considered enemies of the city-states.

Undertaking a Guildleve will start a Levequest. Only one Levequest can be undertaken at a time, with the exception of crafting and fishing guildleves, as those can be completed at a player's leisure. Every 12 hours (Earth time), players will earn three "leve allowances" (up to a maximum of 100) which can be exchanged for guildleves at the various Levemetes throughout Eorzea. Failed guildleves can be retried on the spot, but doing so will expend another allowance.

Guildleves are special tasks issued by the Adventurers' Guild. These tasks vary greatly in nature, and there is something to suit adventurers of all persuasions, be they skilled combatants, deft artisans, or keen-eyed gatherers.

To undertake a leve, simply speak with one of the many levemetes stationed at outposts throughout Eorzea. Whether alone or in a party, rich rewards await you in the form of experience and useful items.

Leve plates are made of stained crystal which makes it easy for the aetheryte and the leve plate to resonate due to the fact that they are both manifestation of the planet’s lifeblood, which is made up of aether. These plates contain only the issuing city state name and the "theme" of the guildleve; all other information is shared with the adventurer directly from the person at the adventurers' guild counter and can be reviewed in the quest journal.

Upon completion of the levequest, a prompt will allow aetherial transportation back to the Levemete that issued the guildleve. This prompt can be declined and automatically cancels after twenty seconds.

Guildleves are available starting at level one with new sets every five levels. For Battlecraft and Fieldcraft leves, a difficulty option will adjust the level up to four above its base value.

Players can only obtain up to sixteen guildleves at a time. All types of levequests will reward EXP, gil,. and appropriate treasure.

These tasks may be undertaken by Disciples of War or Magic. Although adventurers may only be offered simple tasks in the beginning, arduous trials and bountiful rewards await those who prove their worth.

These levequests require the player to slay certain opponents within 20 minutes as they fulfill objectives. The objectives will vary, ranging from escorting a civilian to flushing out disguised creatures (such as Imps). These tasks are usually denoted by the plate image:

During the course of the leve, treasure chests may spawn on the way, containing either potions or aetherial gear with randomized stats. Some Battlecraft leves may also spawn a "Wanted target," a stronger than usual monster that awards a bonus if slain. These monsters are determined by the zone a levequest is undertaken.

Company issued guildleves are available to players of once they've enlisted in a grand company. Those leves are not issued by the Adventurers' Guild levemetes, but by company officers stationed at several locations in Eorzea. Players can obtain guildleves from any of the three Grand Companies, however will receive a bonus for completing levequests issued by their own company.

These leves are similar to Battlecraft Leves in nature, except they can only be undertaken solo, and reward Company Seals instead of treasure. As with guildleves, accepting company leves will consume players' leve allowances.

Note that while treasure chest may still appear during Company leves, no wanted targets will spawn.

These tasks may be undertaken by Disciples of the Land. Adventurers will be sent into the wilds not only to harvest the realm's bounty, but to also conduct surveys.

They will always give gil upon completion, as well as treasure such as crystal shards, and require the player to gather certain resources within a 20 minutes timer. Much like Grand Company leves, these can only be undertaken solo. Fishing leves are different; they only require the designated fish to be obtained turned in, similar to Tradecraft leves.

They come in various types:

Unlike Battlecraft leves, there are no treasure chest during Fieldcraft leves.

These tasks may be undertaken by Disciples of the Hand. Adventurers will be called upon to craft a wide range of items, fulfilling orders both great and small.

They only require that the designated item be crafted (or otherwise procured), and turned in by the requested amount. As such, they are not "initiated" like Battlecraft or Fieldcraft levequests.

They come in three types:

Note that "Charity" leves allow turn in of up to two additional orders without having to reobtain the levequest.

Tutorial leves are an easier type of battle leve, designed for beginners. They are always of the "Valor" type, are base and wield significantly smaller rewards. Players must complete one for each Levemete before being permitted any others.

Levemetes can be found at the Adventurer's Guild in each city-state and throughout Eorzea at various settlements. Each will require a tutorial levequest be undertaken as trial before full authorization is available.